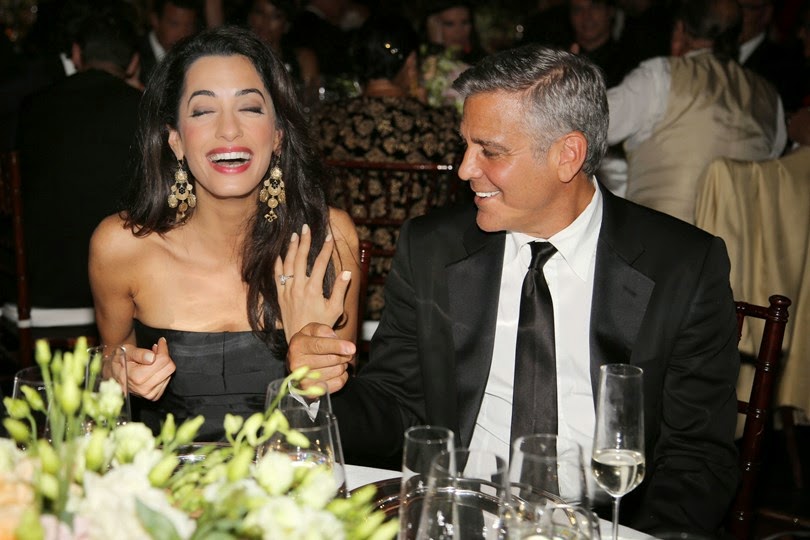 I've often-times been compared to George Clooney. The charm. The jetsetting. The playboy ways. The handsomeness. The way women swoon over me...

Okay. That's a lie. I've never been compared to George Clooney. But in my own head, I've drawn comparisons with his life and mine. (I've also drawn comparisons to Frida, Einstein, and Count Chocula, but the "institution" advises me not to mention this in public. And I've been good for six months! Dr. Chan says I can have visitors any day now!) As Clooney traveled the world, a new woman in hand every few years, spending time on his Lake Como estate (very relatable to that time I spent a few nights at Motel 6 in Bakersfield), aging better each year, I couldn't help but wonder would I also "suffer" the same fate as Clooney? Finishing out my 30s, going into my 40s,  maybe even my 50s and beyond, without ever finding "the one"? – yet, still being ridiculously good-looking?

Say what you want about me, but know that I have always considered myself a hopeless romantic.

During this year's Golden Globes, when Clooney delivered his speech after accepting the Cecil B. Demille Lifetime Achievement Award, he said that: "It's a humbling thing when you find someone to love -- even better when you've been waiting your whole life. And when your whole life is 53 years, Amal, whatever alchemy it is that brought us together, I couldn't be more proud to be your husband."

I found myself tearing up at that part more than his wife.

Many times over the years, I imagined how overwhelming, encompassing, and fulfilling it would be when I finally met that person for whom I've "waited my whole life." I'm almost certain there will be no shortage of tears. It's been that long of a search.

In my 36 years, I have thus far not settled with what I'm looking for, and hope that I never will, living my life in a way I have seen no previous blueprint.

But when your father -- who recently turned 70 -- tells you that he may have "10 more years to live," or your mother says that "if you have kids soon, we'll still be able to help out" it forces your hand towards immediacy. I don't have the type of parents that say, "we just want you to be happy." It's always disheartening and a deeply saddening thought for me that I cause my parents such concern and grief. And of course I want my kids to know their amazing grandparents.

As much as people tell me to not worry and to "live my life," my love of my parents and the empathy I have for them will never allow me towards a truly care-free existence. Otherwise, if I lacked empathy, I would probably be living in a new country every year and say, "to hell with what my parents and society says is the norm."

I regularly receive emails from women asking me whether a guy they're seeing is "playing" them and what they should do about it. I respond to every single email, first, asking more questions -- because every situation is unique -- then, mostly coming up with the conclusion that something is amiss. If you have to write a complete stranger for advice, chances are the guy is no good.

I always tell these women to work on themselves, for themselves, because there's nothing you can -- or should -- be doing to try to gain and sustain the attention of a guy. Do it for you.

Amal Clooney is about as accomplished and passionate about her work as anyone else in their respective fields. As mentioned in the Globes broadcast, she's "a human-rights lawyer who worked on the Enron case, was an adviser to Kofi Annan regarding Syria, and was selected for a three-person U.N. commission investigating rules of war violations in the Gaza Strip..."

Of all the women that George Clooney ever dated, it was Amal's combination of beauty, passion, AND intelligence that enlightened him towards the notion that he was actually missing something in his life.

So, to all the women who are concerned about a certain guy and why he may not call you, ask you out, or only calls during late-night hours, there are some things that are within your control, and that's to be the best version of you -- someone who loves their work, strives to better themselves, and continues to challenge herself in new ways. Most importantly, it's to love yourself. Guys will need to be at their best to keep up with you, and not the other way around.

Looking at George Clooney, he's has had no shortage of options in beauty. But, like all the women who have tied down "heartthrobs" and "players," we know that attraction is more than just skin-deep. Beauty is fleeting.

Seeing Clooney get married did give me hope for my own future in love and strengthened my resolve in waiting. I've never stated a desire for perpetual bachelorhood; I do, however, hope to find a strong, articulate, confident, intelligent, beautiful woman, like Amal Clooney -- someone who wants me, but doesn't need me -- so that I can be "proud to be her husband."

The way George looked at Amal during his speech, and the way she looked at him back, I don't think there was any person in that room who thought Amal was the lucky one.