Home » Zombies » What the SVB Would Do in a Zombie Apocalypse

What the SVB Would Do in a Zombie Apocalypse 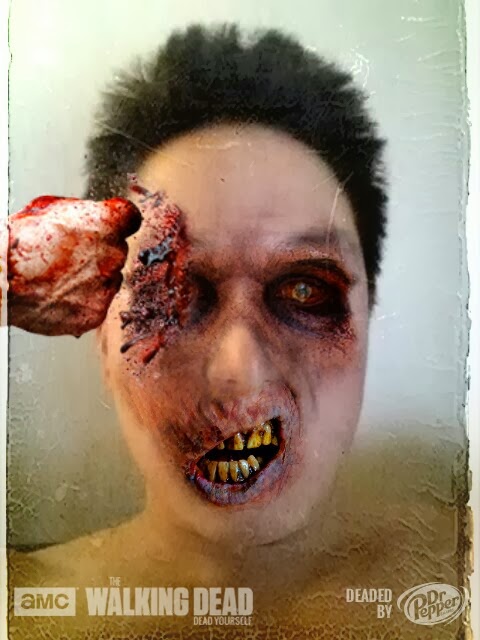 Some of you may know that I'm a huge fan of the zombie genre. While The Walking Dead is excellent, I kind of wish they had zombies that sprinted after people, a la Dawn of the Dead – my favorite zombie movie and the one where they live in a mall for a period of time. As a former track & field runner in high school and a bit of college, I just never felt that "walking" zombies could ever catch up to me. Plus, I haven't fallen while walking or running (the number one cause of death in horror flicks) since I was three years old. I'd imagine that Usain Bolt, Adrian Peterson, and I would all be hanging around a campfire together, laughing at how that pregnant lady couldn't run fast enough from those zombies earlier in the day. Then, we would eat the rest of the Cinnabons from the abandoned store before reading magazines at the newstand with Kate Upton's latest photo shoot.

I believe a seemingly fringe horror genre that became the backdrop for the most popular cable television show ever, gains its allegiance of fans because people just want to feel like they're a part of something. A group. A bond. A family. A will to survive. Unlike most other television series, The Walking Dead could be any of us out there. We're not watching lawyers battling it out in the courtroom, police officers on the street, cancer-ridden drug dealers, sociopathic serial killers, mob bosses with families, or any other far-fetched characters, we're watching "seemingly normal" people try and survive, all while examining what they would do in the face of an unparalleled adversity.

While it's been quite some time since I last did a post where I wrote it in screenplay format, here's a throwback envisioning a scenario where a zombie apocalypse is thrust upon us.


ZOMBIE-A-GO-GO
(It's a working title)

Kevin is sound asleep. He scratches his butt occasionally. And even though he is deep in stupor, he still unconsciously smells his hand afterwards and giggles.

The sirens of ambulances and police cars are blaring in the distance. Cars are piled on top of each other in a heap of wreckage. People are frantically running everywhere being chased down by blood-thirsty zombies.

Sirens blare through the window of his house. The clock shows 5pm. Kevin is sound asleep mumbling something about, "don't put it there, that tickles." He then goes to scratch his butt before smelling his hand.

The sleepy town of Cupertino is up in smoke. Decay and ruin is everywhere. There are very few cars even operational. A few Asian tiger moms are still shuttling their kids out of SAT prep courses, sprinting between zombies, heading to kumon class.

Kevin slowly begins to arise. He checks his phone. There are 796 text messages. Kevin ponders this for a moment.


KEVIN
That seems to be a bit high. I must've slept through two days again.

Kevin puts down his phone and relieves himself in the toilet. He looks at his naked body in the mirror while he's peeing and likes what he sees. He does several flexes before taking a sideways glance at the nice curvature of his buttocks. He knows it's not much, but swears that if he only had a few more pounds on his body, his butt would be rocking.

After 30 minutes of continued flexing in different poses, pretending he were a Playgirl model, Kevin starts to get a headache and realizes he's hungry. As he goes to the fridge, he sees that it's turned off. He tries to flick on the lights. No luck. Before even attempting to work on the starter box in the garage, he already assumes the worst. He looks out the window. There's smoke and fire everywhere. Zombies amok.

Kevin calmly pours a bowl of Alpa-Bits cereal because he knows that breakfast is the most important meal of the day and he'll need some sustenance in his body to survive. While eating, Kevin painstakingly forms child-like words like, "poop" and "boogers," that make you question whether Kevin has had any formal education. After finishing, he goes to the closet and grabs the duffel bag with a label on it that says, "Zombie Apocalypse: It's Time". The bag sits next to one that reads, "You're a Vampire: DVDs of Sunrises and BBQs So That You'll Never Forget".

Kevin straps on several pieces of hockey gear and covers open areas of his body with shin guards. He walks outside and yawns loudly. Zombies look up from their daze. They sprint at Kevin. Kevin calmly walks to his car. The zombies reach him first. They cannot bite through his protective gear. Kevin talks mad smack to them.

KEVIN
You ain't sh*t. That's the best you got?!? You trying to tickle me?!? I watch Shark Tank and those guys are way scarier than you! Holy smoke, is that you, Bob? Is your wife still alive? Because she made a pass at me last week. Didn't want to be the one to tell you, but hey, it is what it is. Anyhow, I'll see you guys later. Bob, tell your wife I said hi.

Kevin gets into his car and drives off, backing over Bob and a few zombies along the way. He casually sings to Carly Rae Jepsons' only hit, Call Me Maybe. He has it on CD.

Kevin knows exactly where he's going. He stops at a nondescript house, gets out of the car, heads to the door, before kicking it down dramatically. Screams can be heard from behind the couch. The head pops up of a beautiful woman named, Bianca.

KEVIN
Come with me, if you want to live.

BIANCA
Who are you?

KEVIN
That line was from Terminator 2. It was one of the rare sequels that was better than the original.

BIANCA
Please don't hurt us. It's just me and my parents.

Two other heads rise up from behind the couch. They seem very frightened.

KEVIN
Don't worry. I won't hurt you. I'm here to help. It's a zombie apocalypse. We're going to be just fine. I've watched Dawn of the Dead, Shaun of the Dead, I Am Legend, World War Z, and many others that don't deserve mention. I can quote every line from those movies. I got this. But you must...
(Kevin deepens his voice)
Come with me, if you want to live.

BIANCA
Can we pack a bag?

KEVIN
We!?!? Your parents are staying here. They'll be fine. Plus, if your parents came, they would be major cockblockers and it would take you a lot longer to fall in love with me. Eventually, your mom would probably fall in love with me as well, and that would just be weird. Don't worry about them, I brought a can of Chef Boyardee and this Walkie-Talkie so that they can communicate with us at all times. It only works at distances of 100 yards, but you'll have at least five seconds to talk with them before losing range.

BIANCA
(Turning to her parents)
Mom, Dad, I'll come back for you.

KEVIN
You'll probably never see them again, but we should get going. In retrospect, breaking down your parents' door to the house was a bad move. I've severely handicapped them against a future zombie attack and the roar of the car engine and the unnecessary screeching of tires against the concrete will alert zombies to the area. They're as good as dead. But anyhow, look at me babbling on and on. I'm Kevin, by the way. Have you ever heard that Savage Garden song, "I knew I loved you before I met you..."? I saw you at Whole Foods last week. Followed you home, so technically this is your first time meeting me. But I've seen you many, many times parked right outside there on the street. Anyhow, there's plenty of time for small talk as we forge our new life together in this apocalypse. Let's go!

Bianca takes Kevin's hand and they rush out to his 1986 Buick LeSabre with counter-clockwise spinning silver plastic rims.