Home » Zach Obront » What It's Like to Meet with Tucker Max, The Investor, and Why He Probably Shouldn't Serve on Your Advisory Board

What It's Like to Meet with Tucker Max, The Investor, and Why He Probably Shouldn't Serve on Your Advisory Board 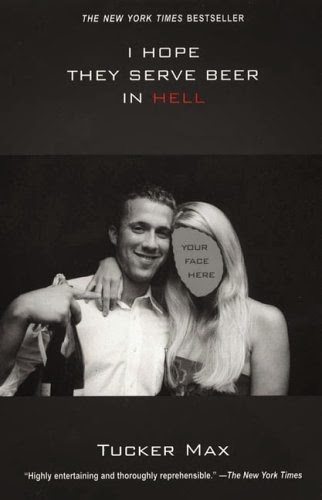 Many of you may know Tucker Max as the callous, crude, and disarmingly honest author of I Hope They Serve Beer in Hell. His tales of sexual revelry in blog format may have even been passed around years ago in your inbox before the publishing of his books. While I found his stories entertaining, I was always more intrigued with Tucker Max, the person, than I was of his sexual conquests. I think the nature of his stories belied his intelligence, uniqueness of his background, and his perception of the world. I admired the cadence of his writing – the setup and timing of his comedic humor.

I reached out to Tucker to join my Advisory Board for On A Map, Inc., in particular, for the value he would bring to our first niche travel site launched: GirlsOnAMap.com, a site that caters to the bachelor traveling demographic. I thought his connections and his audience of "fratire"-loving schenanigans might be of value in spreading the word.

During the process of getting him to agree to sync up on a phone call (which he suggested after a few emails back and forth – win!), I was able to secure another author, and controversial pickup-artist, Roosh V, to join my advisory board. (While I don't agree with much of what Roosh writes, I like differing points of view than mine.) This made it almost redundant to have someone like Tucker on the board. With Roosh, I had someone who could help me deal with some of the unwarranted controversy surrounding GirlsOnAMap, which I documented here. In what manner Tucker might be able to help the company on top of that, I was still diligently researching. But I wasn't about to miss out on an opportunity to pick the mind of someone I admired for his writing prowess and branding. Little did I know, this wouldn't be a two-way conversation.

My preliminary research showed he was actually an active angel investor with over 20 investments – and goals to reach 100 early stage investments by 2018. (His fratire-way of life seemed to be a thing of the past. He is 38, after all.) Our email interactions were about as abrupt as you would expect from the personality in his books. Initially, he sent me to schedule a call with him at $10 a minute on a site called, Clarity.fm. If you're a math man, that's $600 an hour. I truly thought this was genius for a man who commands so much attention.

But, much like I've never paid for a prostitute, I wasn't about to pay someone just to ask him whether I could give him a portion of my company to serve on my advisory board. After a few more emails back and forth, he responded with this gem of an email – which I loved:

Your deck doesn't matter, and I have no desire to go over it. I've seen thousands of decks in my life, they are about as meaningful and realistic as unicorn farts. Here is what matters:

1. How good is the idea? 2. How big and competitive is the market? 3. MOST IMPORTANT: Can the founder(s) & team execute this idea?

Most pitch decks don't adequate answer 1 & 2, and I've never really seen a pitch deck that can answer--or even addresses--3.


My responding email led to our call, which you can read here. What I didn't really appreciate about the previous email interactions was his insinuation of how busy he was and how important his time is. We're all busy. I can email Ron Conway – and he's not even an advisor or investor in my company – and expect a gracious reply within a few hours. I know Tucker's time is more valuable than mine – from a monetary standpoint – but it's not necessary to highlight. Tucker also asked for an equity stake of at least 1%, to even "start the discussion," which is something I said I couldn't agree to without at least having a good conversation with someone. (Typical advisory board shares would be .1% to .25%.) Even then, for 1%, they would have to far exceed the typical value of an advisor for me to warrant giving up that much of a company that I have bootstrapped and worked side jobs to sustain.

Before the call, Tucker sent a conference call invite that included four other people:

Unlike most other investors who CC some partners and colleagues, I initially couldn't figure out who these people were and why they would be on the call. Doing some research, they weren't in the investment world, but came from all different walks of life: real estate, politics, entrepreneurship, and... thought leadership!?!? Tucker has stated in some of his previous posts about his shortcomings and about surrounding himself with intelligent people. I'd imagine these people were filling in the blanks of his expertise. I respect that.

During the call, it was just Tucker and I, as the other four participants were muted. The beginning of the call started out kind of awkward, as I didn't expect there to be any small talk or pleasantries after our email interactions. Plus, for a guy who normally bills $10 a minute, I thought it would just be best if we cut to the chase. So after a bit of silence, I asked, "where do you want to start?" And it was fortunate for me that I wasn't paying, because after 10 minutes he still didn't understand the company. (He understood it from the emails, just not in person, apparently.)

I'll admit, I probably did myself a disservice with Tucker by allotting some of my explanatory time on monetization – which is what most other investors care about. Tucker only wanted to understand this from the point of a consumer. Why would he use this. Why is someone rating pictures from the outset. Why is this a travel startup and not a platform for connecting peers. Why are we different from any of the other travel startups out there.

Frankly, I have great answers for all of these questions, but I take the blame for not conveying it well enough for Tucker to understand. This is a shame, considering I used to make a living telling complicated stories on the news in roughly a minute. When I first came to Silicon Valley, I loathed the jargon and liberal use of acronyms that distanced startups from their actual consumers. In talking to Tucker, I became a victim of the overuse of "jargon," which Tucker related it to as, "not understanding the product," or "trying to hide behind the words."

Like Jerry Maguire, "who had I become?" (Conversely, if I didn't use terms like "SEO" with a Silicon Valley investor, I would probably have my meeting be cut short.)

Then, when it came time for me to ask Tucker some questions on what I wanted out of him, I was flatly rebuffed for asking about his relationships with his current startups, his experiences, and how he's been able to help them grow. For me, this is a similar question I've asked in many job interviews (and almost every single one I got the job), where after being interviewed, I'll ask the direction of the company, where they see the company in five years, what they see my role in the company as and how I'll grow in this position... I think it shows that you want to be invested in the company and they invested in you.

This is what you should expect out of an advisory board member – a mutually beneficial relationship with an open dialogue.

With Tucker, I never felt there was this possibility of open interaction, as he never ceded control of the conversation – constantly cutting me off – even when I interjected to answer his question. I get it though. For someone who writes very opinionated books, he's looked upon to have strong answers. Passivity has never been, or will be a trait of his. And I don't expect that. But I do expect some modicum of respect and – if he were to be an advisory board member – to have an open line of interaction where I didn't feel the pressures of a guy who is currently an "advisor in 7 other startups" and bills $10 a minute.

Who knows? My pitch was definitely not its strongest and me going into the meeting, curious as to what might make him worth 1% of equity, probably didn't stroke his ego enough.

Tucker also flatly refused to leverage his network, his Facebook followers, or "fratire-facing" blog to help. (He has another blog now to focus on his second act in life). So I guess there was no where to go but to say goodbye from there.

I'm not trying to make Tucker out to be an asshole, even though he calls himself that. I think he's just very opinionated and free of bullshit. At the end of the conversation, he did offer words of "wisdom," saying that he thought I was a smart guy, and reiterated repeatedly that he didn't know everything. Even offering up an anecdote about how he could've sought out Evan Williams at SXSW for an investment in Twitter – in its infancy – for an investment, because it was well-known that he was making the rounds. He didn't, which he said cost him maybe $20MM.

Tucker Max might be a decent investor, because his observations on society and trends can be spot on. He's just not a good person if you want someone to listen and then offer feedback. Maybe because so many people expect provocative words out of his mouth, he's lost the ability to sit back, listen, and then offer a thoughtful response.

Maybe his 7 other startups he advises can tell you something different, but he's an intimidating person to corner, and I believe he still loves the sound of his own voice.

In the end, it's true, I came to him. He holds all the cards. Maybe I should just sit down, shut up, and listen. I'm still grateful for the meeting, but came out of it feeling like I needed a Maker's on the rocks. He can do that to you. But for someone who is arguably approached more for his fame, branding prowess and connections, of what value would he be on your board at 1%, much less .1 or .25%, if he isn't willing to use some of that fame to help your company out? But hey, he may have just hated the company, or the way I verbally conveyed it.

Frankly, our growth has been nothing short of respectable as we've been featured in several countries in Marie Claire, Yahoo, MSN, and Elite Daily, amongst others, and I'm very proud of what my team has been able to accomplish.

Like Tupac, I ain't mad. I still find him a fascinating person and wish him the best of luck as an investor.