I've long advocated sex as a free-standing art form and possible to be devoid of emotion. Of course, this has to do with me yelling out – more times than I can count – "CALL ME," which they never do. Then I curl up in the fetal position and let the shower pellets wash away the dirtiness that comes with being slapped around and called dirty names. Two of my favorite female friends have a refreshing openness about sex and kicking guys to the curb after they've gotten what they want. I find their behavior liberating. Why should females be held to different standards of sexuality when males are lauded? The following is a guest post from a sex blogger in New York. She can be my third best female friend. 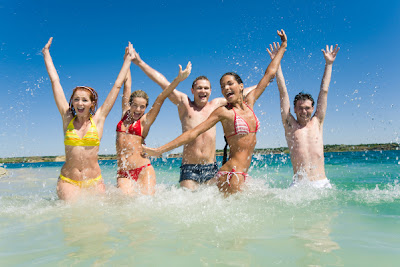 As much as I thrive on the adventurous side of travel (the cliff diving, splunking, zip lining, dining on scorpion...), there's another audacious, somewhat riskier side of world exploration that I also have a passion for. When I'm not hiking through a rain forest or investigating whiskey distilleries throughout Scotland, I'm screwing my way through the countries I've visited. Not many chicks can say they are a “woman of the world,” but I feel this term truly applies to me. Since I was eight, I've been traveling throughout the world. What can I say? I’m a lover of men—young, old, short, tall, and, as Jay-Z so eloquently puts it, “I swear, I love ‘em all”—so, naturally, I find the need to broaden my sexual horizons during my cultural excursions.

Of course my sexuality typically comes into question when devolving the details of my excapades, both foreign and abroad. Most women wouldn't even dare go to some of the places I've been to solo, nor would they have sex in a tent on the beach in a remote surfing town in El Salvador, so I thought it would only be apropos to catalog my holiday sexual trysts. Oddly enough, I received some pretty nasty (and not in a good way) feedback from both men and women: everything ranging from wishing a plague of genital warts upon me to insinuating that I'm begging to be the next Natalie Holloway. It's crazy to think there are entire resorts and vacation packages devoted to helping men get laid internationally, however, the mere mention of a woman seeking out the same sexual adventures as her male counterparts is still seen as depraved. This hasn't deterred my sexual exploits or my fixation with digitally documenting them, though. While I'm no Gloria Steinem, I do like to see myself as being somewhat of a voice for the intelligent, free-spirited, independent ladies of today.

Throughout the years, I've had my fair share of amazing vacay sex. I spent my 25th birthday in Barcelona—not my favorite place—but, in a city full of young professionals and students from a variety of nations, I knew I’d find something that would suit my fancy. The night of my birthday, my friends and I hit up the strip of bars along the beach in Port Olympic, and that’s where I met him—my Aryan God. Tall, lean, beautiful, and German, attributes that would've made Adolf H. cream in his pants. This may sound far-fetched, but I kid you not: we spotted each other from across the room, our eyes locked, and it was over. I knew I had to have this boy. Lucky for me, he had to have me as well. So after exchanging meaningless chatter for a good 30 minutes we decided on our next move: finding a nice place to get our hump on. My hotel room was out of the question as I was sharing it with my somewhat prudish girlfriend, which was a shame because I brought along some fun toys from Adam & Eve (a lady is always prepared), and his place was a good hour away. Well, being the open-minded, free spirit that I am, I suggest a nice, romantic romp on the beach. We ended up getting down behind a huge rock on the beach as the sun was coming up. It could’ve been semi-romantic had it not been for the crowd of people standing on the pier looking down on us. At least we received a standing ovation at the end.

While I feel I've had a good run overall, I have experienced some awkward and even downright disturbing hook ups while on the road. After having a brief romance with a nice Irish lad, I had high hopes when I went trekking through his homeland. Although the accents were quite appealing, the men, not so much. When I finally did find a suitable bed companion, it wasn't at all what I imagined it would be. After stealing me away from a less attractive codger, this tall, stylish and handsome bloke thought it be only be right for him to accompany me home. Well, a few more drinks and some casual convo, and, well, you fill in the blanks. Our night together was mediocre at best, but it was the morning after that made our exchange notable. I don’t know how, but I managed to attract the most Catholic, closeted, sex addict in all of Ireland. Upon waking up, he had immediate regrets and all but begged for me to accompany him to mass so he could repent. I tried to soothe his worry and guilt (nothing like good ‘ol Catholic guilt to ruin a perfectly good shag), but nothing seemed to work on this one. After pretty much comparing me to Mary Magdalene, I threw his uber religious ass out. Not before he left me with a prayer card, of course, which I still have as a reminder to never bang a devoutly religious anything (sadly, he wasn't the first Jesus freak to pull a David Puddy on me).

My travels have been a menagerie of unique experiences and nervy exploits, both in and out of the boudoir; however, like anything I do in the great, wild world, I do it safely and wisely. Although there are certain risks involved in many activities you do while traveling, remembering to play it safe should be number one, no matter your gender.

I actually have a section in my book, Berating Others On Your Way to a Lifetime of Happiness, that is dedicated to sexual conquests and performance capabilities of those overseas. Vacation sex is the elixir of life! Except when a girl tries to wake you up in the morning for more sex after a heavy night of drinking. Just let me sleep for the LOVE OF GODDDDDD!!!! 10 - 12 hours of sleep should not be too much to ask! Read a book, make an omelet, or take some money off the dresser and call a cab, for pete's sake! And don't be surprised that I don't remember the answer to any of the 100 questions I asked you the night before.