Where to Live in Silicon Valley When You're Young and Single

People have been known to email me when they move to Silicon Valley and want to know where they should live as a single person - guy, girl, young, old, divorced, you name it. Most of the time I like to respond by asking them to send me a naked picture of themselves - guy, girl, young, old, divorced, you name it. I don't discriminate. Almost always I tell these newbies to avoid, at ALL costs, San Jose - or Man Jose, which is a term that I have convinced myself that I coined. I challenge you to prove otherwise. Most of the time I tell people who are young and single to consider living in Campbell, Palo Alto, Los Gatos, or Santana Row (which is a development on the outskirts of San Jose - close to people who live above the poverty line).

When I have been somehow fooled into visiting downtown San Jose, the highlight of each night is not getting shot by some Mexican or Vietnamese street hoodlum. (It's okay. I'm ethnic too. We form a bond around not being white.) The second highlight is visiting La Victoria Taqueria and drowning my burrito in orange sauce. La Vic (that's the shortened, friendly version of the name) and their orange sauce is so good, they have two locations about three blocks from each other. AND, they have an orange sauce police, because people were stealing the bottles of orange sauce (my friend Zach!!!). I don't know how to describe it other than it's better than salsa, creamier, and awesomely spicy. I have never had anything remotely close to it. We sit around drunk and debate how they made the sauce. Although I never have much to say, because I can't cook, so I just listen and hum happy songs in my head.

Where were we? Oh yeah, so, while out on a date with a charming, beautiful woman, I made a shocking discovery - downtown San Jose isn't so bad. I might actually consider living there now, if I made money, and had material possessions. What?!?!? A lot of people have boxes for end tables.

We decided to go to an area called San Pedro Square Market, where we found wine bars, hipster pizza makers (you know, those guys with the big earrings that stretch out holes in their earlobes for whatever insane reason), fusion food, coffee, live music, and good-looking, non-ghetto people!!! Hell, I thought this square and its restaurants could fit into the Ferry Building in SF quite nicely. San Jose women are actually VERY attractive, contrary to what you may believe. The problem has always been that the ratio is horrendous. And everywhere you look, someone might want to fight you because you scuffed their Pumas. San Pedro Square actually had a very respectable ratio! 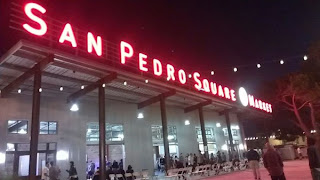 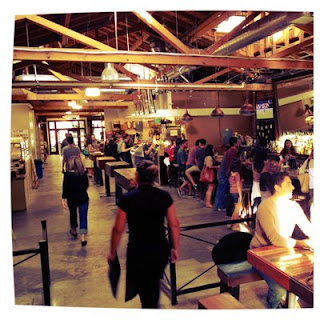 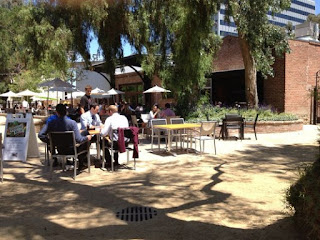 While walking to the car, we went through a bar/restaurant called, Blush. It was an unpretentious breath of fresh air. A tad less-dressy than Santana Row with an eclectic vibe, where people seemed comfortable in their own skin. Afterwards, we went to a speakeasy outside of San Pedro Square called, Single Barrel. I read about it in USA Today, so I had to check it out. This is my neck of the woods and no national reporter is going to know more than me. In case you didn't read about my past accomplishment, I have a very high IQ. I know my multiple choice questions, thank you very much. Single Barrel was maybe the longest duration line I have waited in since the Jurassic Park Ride at Universal Studios (about 45 minutes at 10pm on Friday). Drinks are upwards of $10, but the bartenders craft you a beverage based off of your taste preferences, using things like orange peels and large round ice cubes. I am easily amused.

I'm kind of proud of downtown San Jose. Rejuvenated. The San Jose State Football team finished the regular season ranked in the top 25 for the first time since 1975, downtown is actually livable and hip, and the Silicon Valley Bachelor wrote a book! (I like to adopt myself to towns that are in vogue.)

In case you were just scanning this post, here's a cheat sheet for some of my new, updated places to go in areas you may consider living:

And, please, feel free to email with any questions you may have on your potential future home... but don't forget the naked pictures.