Home » Walter Isaacson » The Romantic Side of Steve Jobs

The Romantic Side of Steve Jobs 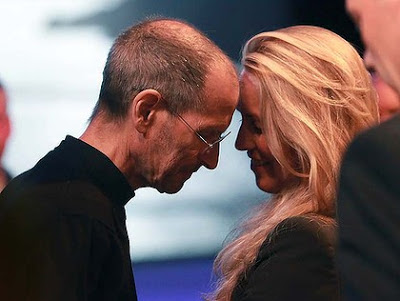 I just got done reading the Steve Jobs biography, about a day before the one year anniversary of his death on October 5th, 2011. That is also my birthday, which explains the lag in time for writing this post as I have been blacked-out drunk since then. The Steve Jobs biography by Walter Isaacson is one of the top two books I have ever read. Granted, I have only read four books in my lifetime, with the other three being books that ask you to identify shapes, colors, and numbers, but you can see how that frustration led to the abandonment of all books. In case you're curious, that other top book was the one identifying colors. I was able to get three out of eight correct, so that made me happy.

The Austin Powers movies once started a movie trailer by saying, "if you can only see one movie this year... see Star Wars. But if you can see two movies, see Austin Powers!" That's how I feel about the Steve Jobs book and my book. If you can only read one, read Steve Jobs. If you can read two, read Berating Others. (Buuuuut... if you do choose my book, let me make it easier on you and include the link here.)

I LOVE books that mix a compelling story line with fascinating historical information - the Da Vinci Code being an example. I'm a history buff, but I also love people who are passionate. Steve Jobs had that passion and he inspired, not because of what he was able to do for the bottom line, but for the products and excellence he created. What gets far less notice is what he was like as a human. While reading this book, I couldn't help but think about how many times his food was probably spit in as he berated others (hey, that sounds familiar), notably food servers. He was also a constant cryer - often crying in front of others in heated exchanges or passionate interactions. I can't imagine one of the business world's most powerful people breaking out into tears, but it was all documented by Isaacson, who had almost unlimited access to Steve Jobs, his business associates, and friends. You will be riveted by the number of people he was close to and dealt with during his life. I was constantly amazed at who, how, and what those interactions were like. Bill Gates? Larry Ellison? Michael Eisner? Jeffrey Katzenberg? Bill Clinton? Bono? Bob Dylan? All fascinating. But none more so than his life in love.

Here is a poem his former lover, Tina Redse, wrote to him years later. She's the woman he nearly married and went back and forth on in the days leading up to his marriage to Laurene Powell. It's tragic and beautiful. Redse describes the period just after he had been fired from Apple and they had been living in Paris. The poem is followed by a paragraph later in the chapter written by Isaacson.

"We were on a bridge in Paris in the summer of 1985. It was overcast. We leaned against the smooth stone rail and stared at the green water rolling on below. Your world had cleaved and then it paused, waiting to rearrange itself around whatever you chose next. I wanted to run away from what had come before. I tried to convince you to begin a new life with me in Paris, to shed our former selves and let something else course through us. I wanted us to crawl through that black chasm of your broken world and emerge, anonymous and new, in simple lives where I could cook you simple dinners and we could be together every day, like children playing a sweet game with no purpose save the game itself. I like to think you considered it before you laughed and said "What could I do? I've made myself unemployable." I like to think that in that moment's hesitation before our bold futures reclaimed us, we lived that simple life together all the way into our peaceful old ages, with a brood of grandchildren around us on a farm in the south of France, quietly going about our days, warm and complete like loaves of fresh bread, our small world filled with the aroma of patience and familiarity."


Redse later married, had two children, and then divorced. Every now and then Jobs would openly pine for her, even after he was happily married. And when he began his battle with cancer, she got in touch again to give support. She became very emotional whenever she recalled their relationship. “Though our values clashed and made it impossible for us to have the relationship we once hoped for,” she told me, “the care and love I felt for him decades ago has continued.” Similarly, Jobs suddenly started to cry one afternoon as he sat in his living room reminiscing about her. “She was one of the purest people I’ve ever known,” he said, tears rolling down his cheeks. “There was something spiritual about her and spiritual about the connection we had.” He said he always regretted that they could not make it work, and he knew that she had such regrets as well. But it was not meant to be. On that they both agreed.

It's like a passage from a Nicholas Sparks novel! What's next?!? They hire James Garner to play Steve Jobs in the movie!?!?! Just tell me ahead of time so I know to load up on several boxes of tissues. Kleenex probably sponsors Nicholas Sparks movies, btw. Anyhow. Jobs was also a wise, passionate man outside of technology. I wholeheartedly agree with this interaction he had with his friend, Rupert Murdoch. That man doesn't care about the United States. He's an Australian businessman who understood a ripe opportunity to exploit in the U.S. - creating a greater divide amongst the citizens of the U.S. and instilling hate in our hearts.

In return for speaking at the retreat, Jobs got Murdoch to hear him out on Fox News, which he believed was destructive, harmful to the nation, and a blot on Murdoch’s reputation. “You’re blowing it with Fox News,” Jobs told him over dinner. “The axis today is not liberal and conservative, the axis is constructive-destructive, and you’ve cast your lot with the destructive people. Fox has become an incredibly destructive force in our society. You can be better, and this is going to be your legacy if you’re not careful.” Jobs said he thought Murdoch did not really like how far Fox had gone. “Rupert’s a builder, not a tearer-downer,” he said. “I’ve had some meetings with James (Rupert's son), and I think he agrees with me. I can just tell.”

Getting back to his love life, Steve Jobs also wrote a poem for his wife on their 20th anniversary. Knowing at this point that he had cancer, it was reflective, simple, and sincere.

"We didn’t know much about each other twenty years ago. We were guided by our intuition; you swept me off my feet. It was snowing when we got married at the Ahwahnee. Years passed, kids came, good times, hard times, but never bad times. Our love and respect has endured and grown. We’ve been through so much together and here we are right back where we started 20 years ago – older, wiser – with wrinkles on our faces and hearts. We now know many of life’s joys, sufferings, secrets and wonders and we’re still here together. My feet have never returned to the ground."

By the end of the recitation he was crying uncontrollably. When he composed himself, he noted that he had also made a set of the pictures for each of his kids. “I thought they might like to see that I was young once.”


Steve Jobs had many faults, but the story of his life is one of the best stories of any kind that I have ever read. He was a man of unapologetic conviction. He was pure. If you read enough stories on SVB, you'll know that I'm a romantic. I am touched by passion. While Steve Jobs may receive the most attention for his technological achievements, the purity of his feelings should not be overlooked or forgotten.

I'll make it a point to remember to live with more passion on October 5th of every year, as it celebrates a birth... and a death.