So, I finally got my next box from 12Society. They must think that we are the hairiest douchebags in the world. For the second box in a row, we all got a ManGroomer. Only, unlike last month's ManGroomer, that only trimmed nose and ear hairs, this one allows us to trim our sideburns, neckline, and eyebrows. Heck, it's even got a picture to show us how it works! 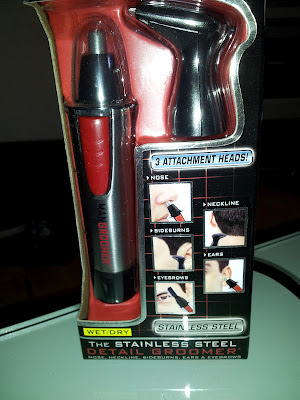 I wish they had included one extra picture to show it trimming the pubes on our balls. That would've been classic and truly made me feel like I got my money's worth.

Anyhow, I did say I would give 12Society one more chance before deciding whether to jump ship. But before I get into that, let me break down what was in this box, how much each item is worth, and who chose them. 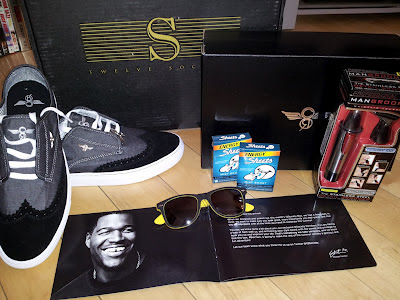 - Creative Recreation Defeo Shoes - Nas. This was the signature item in the box. Great for the hipster and/or hip hopster in all of us. Retail: $75 (but available on Zappos for $60)
- ManGroomer: Stainless Steel Detail Groomer - Tim Lincecum. Really!?!? Again? Well, this one has three added functions (see above), which makes the last ManGroomer a waste. Retail: $24.95
- Kevin Love "Designed" Brandless Sunglasses - Kevin Love. While these sunglasses were probably produced for $0.20 each, they do have a decent hipster design to them. Perfect for your next rave. It would've been cool and more elite if there was actually some Kevin Love "designed" logo as well - to give it that feel of exclusivity, compared to "hey, I got a pair just like that out of a cereal box when I was 10." Retail: (a generous) $1.99
- Energy Sheets 10-Pack (2) - Nas. Apparently you stick these on your tongue and they dissolve in seconds. But at $5.95 a 10 pack, that means it's $.59 each sheet! Let's be frank here, energy drinks are mostly popular for mixing with alcohol, so unless these go well with vodka, I don't know if I'll be buying them anytime soon. Retail: $11.90

For those keeping track at home, that leaves Blake Griffin, Michael Strahan, and Nick Cannon without a pick this box -- this is particularly heart-wrenching for me, considering Nick Cannon was my favorite from last time (see previous post). I was looking for an intro from him along the lines of, "I scored in the 95th percentile on my SATs, once made a woman orgasm from the sound of my voice, and married Mariah Carey without even trying."

As for the box, total RETAIL price equals -- $113.84, which is $75.47 less than the first box. It's still a lot more than the $39 you spent. Although, if you were to go into any DSW shoe store, you can find Creative Recreation shoes in the $30 range. What's important for everyone to figure out for themselves is how likely they are to use any of the items in the box. I don't think we'll ever get an item that we don't already have. Heck, if you don't have shoes, you should probably get rid of your internet connection right now and go fill out some application forms. Most guys, we already buy everything we want or need.

The only joy from this is opening a surprise gift every month. It's like a birthday or Christmas gift -- only you don't have to fake that "present face" - with a plastered smile - saying, "Oh my God, how did you know!??! I LOVE it!" While really thinking, "you sonofab*tch. EVERY year you give me something I don't want or already have. Get me my stupid video game that I told you I wanted or two tickets to the game. If you didn't include a receipt, I will straight up murder your ass."

Now, let me move onto 12Society. They do some pretty annoying, but smart, marketing things. I believe they purposely delay the shipment to get the Twittersphere buzzing with comments like, "where's my box?" "when is it going to ship?" "why does my box still say 'pending', wtf is going on?" "I'm going to straight up murder your ass if I don't get my box soon." (Okay, that last one was made up, but someone should say it on Twitter. I'll laugh. But don't blame me if the cops show up at your door.) I really think that 12Society should just say it'll ship some time at the end of the month, because when you post a date ("28th of each month") and it doesn't happen, people get annoyed. It's like you're lying to our faces.

I also think they delayed shipment to me, and maybe even took a dump in my shoes, after I bashed them in my previous post. I got a lot of views on that post. The shipment comes from Carson, CA! I live five hours away!!! How am I the last person to get a box!??! Don't think I wasn't checking Twitter to see who was getting their box first! I am one of the last!!!

With that said, I am still going to stay with 12Society. I have my concerns for the future. I'd have to imagine that a shirt would be coming up, but I have a lean, chiseled, rippled, muscular, rock-hard, sex symbol frame, and I'm sure there are some fat-asses out there. How they will figure out a form-fitting shirt or one made for bigger people will be interesting. Buuuut, if you're doing this box, you probably have discretionary income. $39 is like 5 hours of work for me at McDonald's -- well, after taxes it's probably 7 hours -- but that's how ballers roll!!! I, personally, enjoy the surprise of opening up a box each month and that's what I'm paying for. Now, invite me to your Secret Santa parties -- ALL of them -- because there may be a ManGroomer in your future!

P.S. If you do want to sign up still, you can do that here.