Home » PerezHilton » How Girls Trick You With Makeup

How Girls Trick You With Makeup

By Kevin Leu • 1:26:00 PM • AnnaLynn McCord berating others on your way to a life of happiness Charlie Sheen Makeup No makeup Katy Perry PerezHilton • Comments : 0

The following is an excerpt from my forthcoming book: "Berating Others On Your Way to a Lifetime of Happiness: That, and Dating Around the World" - expected to be released in July 2012. 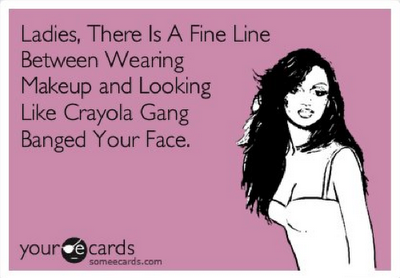 Fellas, tell me if this sounds familiar. You're dating a girl and she stupidly believed you didn't have STDs. You hook up a few times, which is great, because you're tired of paying for all these expensive meals and nights out, and you're really looking forward to transitioning her into watching you play Call of Duty on XBOX and eating Wendy's. It's about time for her to start bringing her clothes in an oversized purse, so that she doesn't seem like she's moving too fast. One night, after you guys "do it", she asks to take a shower, because she actually has a job and had work that day, while you stayed home, watching cartoons, and eating cereal for breakfast, lunch, and dinner. She comes out of the shower, sans makeup, and you don't want to act like anything is different, but gone is that face you really enjoyed looking down at, and in its place is one of.... I don't want to say it. It's like watching "Faces of Death" - you don't really want to remember what you saw, but it was real. And it happened. Her face has been replaced with that of a young boy. So, of course, you're really turned on.... JUST KIDDING! I'm not a Catholic priest. Rather, you see the face, and you're kind of mortified. But then you hope that she doesn't notice that you noticed, while she's probably wondering, while you're wondering, "can I still go out with this boy? She tricked me." Those eyelashes were fake? What happened to the lusciousness of those lips? Where did all that acne come from?

It's just not fair! Because, if you jump ship after she shows you her makeup-less face, you're probably going to hell. You'll have just set this girl back a full level of confidence, and guaranteed that she will add another coating to her foundation from here on out. In fact, she probably won't take off her makeup until the morning after her wedding. Surprise, new husband!!!!

Guys can't trick girls into initially liking them while wearing a gorilla mask. I can't wear inflatable muscles, only to have that awkward moment happen when you're taking off your clothes and your muscles fall out, similar to some of those jelly pads that girls wear to get a bigger bustier. Been there and done that too! Of course, you still hook-up, because you're a guy, after all, and your peen has got a mind of its own. (I just said 'peen'.) But would a girl still hook up with you if all of a sudden your chest and bicep inflatables came tumbling out of your long-sleeve muscle t-shirt?!?!

I have to give it up to this gal, AnnaLynn McCord, for posting a picture of herself without makeup, because she was tired of "Hollywood's perfection requirement". Does she look better on the left? Absolutely. But she's still pretty on the right. I think makeup damages your skin - see the acne on her face? All for the cost of keeping up appearances. 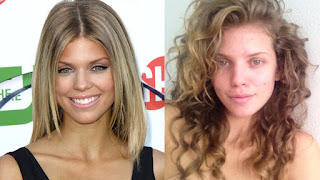 I've got some girl friends who wear a TON of makeup. Like, distractingly, too much. It's a shame too, because they most likely don't need it. While wearing a ton of makeup makes you look better in pictures or at night in the club, it looks freaky in person and in the daytime. Some girls do need it though - ever notice how much makeup Katy Perry wears? It's obvious, even in pictures. Well, take a look below and you'll see why. The picture on the right is one that Perry's then-husband tweeted in the late night hours from their bed. 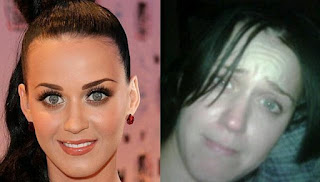 Don't believe it's her? Google it. (If only Bing would pay me money, I'd be like, "Bing that sh*t, b*tch." It sounds much more macho.) I trust everything that's on the web. As well as everything on FOX News. And while we're at it, I also trust PerezHilton and Charlie Sheen's account of everything that went down at CBS.

Anyhow, there's nothing wrong with using something that makes you feel better about yourself. Hell, why do you think I drink so much alcohol? I just want to say that there should be a happy medium. Use the makeup to LIGHTLY accentuate your features and not change them dramatically. I'd like the above story to end differently.

Tell me if this sounds familiar to you married guys out there. She takes a shower and comes out wearing your favorite t-shirt and she looks even sexier. You didn't even notice she wasn't wearing the makeup from before...