The following is another excerpt from my book due in July 2012, "Berating Others On Your Way to a Lifetime of Happiness: That, and Dating Around the World". You're welcome. 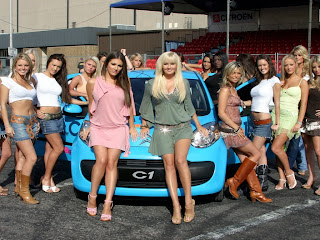 When all else fails for guys when hitting on girls, we like to employ something called the "drive-by honk". It's quite simple really. You see a girl walking or running down the street and you honk at them. They look over at you and the game is over. Ladies, this should tell you that guys have run out of all options. They need a thrill any way they can get it. Honk, honk, honk. The worst is when you have a car that gives off one of those sissy little tweets (I refuse to give ownership of this word over to that stupid internet company). That's why you have to test out a car's horn before you buy it. It's gotta be manly sounding and filled with testosterone.

I remember I was on the back of my friend's rental scooter in the French Riviera and he honked at every single girl we passed. I was mortified, but I couldn't stop laughing at how juvenile it was. I was embarrassed to make eye contact with each girl who would, inevitably, look our way. Not only was the honk the frilliest sounding honk you can imagine, we were also two guys on a mini-scooter weaving our way through $300,000 cars. Oh, and did I mention that I was also shirtless? I'm sure Elton John would've invited us right in for tea and strumpets.

Well, if you don't have the good fortune of owning a manly-sounding honk of a car, and you want more than the thrill of eye contact from a strange woman with a decent posterior, then here are some options outside of traditional bars and clubs.

1. GAY BARS - I have been to a few gay clubs and have even taken a few dates to gay clubs. It's the only place in the world where you feel like a living legend. If you take a date there, the guys make you feel like the hottest piece of ass that ever walked the earth. They also tell your date how beautiful she is and how beautiful of a couple you make. Everyone's egos win! There are plenty of other single, heterosexual females who come with their gay friends and groups of girls who just want to go out and dance. The best parts are there are no threats in the entire club, everyone's dancing and having a good time, and drinks are cheap. Little do these hetero women know, filth like me still slips through the cracks. "Heeeeey giiirrrl, are those boobs real!??! No waaaay! Lemmeee touch. Don't worry... so not into you."

2. COUNTRY CLUBS/CONCERTS - Luckily, I love country music. I would play it while pre-partying if all of my other friends didn't loathe it. So, with firsthand experience seeing Garth Brooks, Kenny Chesney, Rascal Flatts, Keith Urban, Tim McGraw, and many others, you will not find a better place to meet hotter girls than at one of these concerts. Tight jeans. Tank tops. Straw cowboy hats. Tramp stamps. No sense of when to stop drinking... can you picture it in your mind yet? Heaven. In fact, the one place in the Bay Area with the best ratio and hottest girls is Saddle Rack in Fremont. Unreal. My friends thought a country "club" would be whack. They were wrong. So very wrong.

3. COMMUNITY COLLEGE - Chris Rock once said "Community College is like a disco with books. Here's ten dollars, let me get my learn on!" It is like a learning disco, but what he failed to mention was that  the girls here are the ones who weren't smart enough to get into four-year colleges.... or are bitter they had to stay home because their parents couldn't afford to pay for it. This is where you come in and help her get back at her parents. If you find a girl in a class you take at CC, they don't care about your ambition - it's almost better to be a waiter at a cool restaurant and a druggie on the side. Since we started this section with a quote, we might as well end it with another, as Jonah Hill stated in Superbad, "while you guys are at Dartmouth, I'll be over at State where the girls are half as smart and twice as likely to fellace me." He's talking about State University. So, while my math is not good, I would say CC girls are halfer than smart of those at State, which means four times as likely to fellace someone! (Did I catch a niner in there?)

4. TOURIST DESTINATIONS - IN. YOUR. OWN. CITY. Most locals avoid tourist traps like the plague. I looked at the top bars to go to in San Francisco once on Frommers and Lonely Planet and they mentioned places like Ruby Skye, 1015 Fulsom, and Bubble Lounge. While I've been to all those places years ago, I would NEVER, nor have I ever heard any of my friends suggest, going to one of those places. But think back on that trip you took to some far off destination and who you ended up hooking up with... While you may have hooked up with a local, chances are greater that you hooked up with another tourist. It makes perfect sense! They're on vacation; they don't have anyone to judge them or get in the way - like a larger, unattractive, "cock-blocking" friend. The euphoria of travel romance is the elixer of life. It can't be replicated at home, because the lack of responsibilities is not practical. But, you can be that special elixer for that unknowing tourist for one special night!


Well, there you go. As you can tell, I am a man of many experiences. I do not discriminate on gender, sexual orientation, race, societal norms, or irregular ideas. I date and do almost anything. (Hmmm, that last sentence can be read in a number of ways. Oh well.) The most important thing to think about when meeting women, is that you've got to think outside the box and continue to push yourself. If you stop thinking or get lazy, there's some perve out there who will have you beat before you know it.