Getting Revenge After Being Stood Up at the Prom 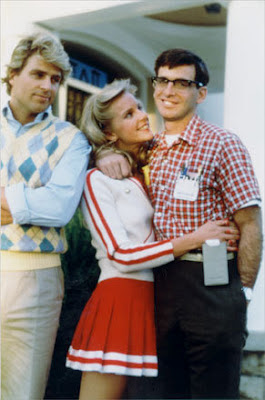 As some of you may know, I am a fan and defender of the little guy. The minority. The nerd. The challenged. The defenseless. The weak. I don't know what it is, or how I became this way, but my Mom has always tried to convince me to be a bipartisan, neutral, bystanding doctor/engineer. Sorry, Mom, I failed you on all accounts. While growing up, she would constantly preach to me, "heroes die first," which did little to sway me from standing up for what I believe in. Like, am I really that afraid of death that I'd live my life as a coward?

I've frantically tried to bang down the door of a house when I saw smoke billowing out from one of its windows - only to find out it was the heat from a clothes dryer against my very first Idaho winter. I've, on more than one occasion, failed to mind my own business and came armed upon hearing a woman screaming. In college, I went out of my way to hate every girl who wouldn't go out with my dorky computer-nerd roommate. In work, I've stood up to a boss whom I felt unfairly discriminated against me and my coworkers. I'm not telling you all this to receive some kind of commendation or acceptance - it's just what I feel is right. I can look at myself in the mirror and that's enough for me. My deepest regrets have been the times I didn't stand up for myself or didn't say what was on my mind.

Recently, a new friend of mine (nicest guy ever) told me a story that gave me an immense sense of fulfillment and joy. He told me about how he asked a girl to prom his Senior year and she said, 'yes'. On the day of the prom, he went to go pick her up and no one answered her door. He found out through others in his class that she ended up going with someone else. Distraught and embarrassed, he did what any sensible person would do. He got drunk. And then he went to his prom, knowing that EVERY single person in that room knew that he had been stood up. And she was there with her new date. I'm not a big advocate of curse words, except when playing basketball and in the heat of the moment during sexual intercourse, but if anyone deserves to be called the "C" word, this would be it.

A few years later, my friend came into his own. He filled out and went from decent-looking to a stud. (Unlike myself, who peaked in 8th grade - going from stud to has-been to barely hanging on a few short years later...) He ended up running into the girl at the mall and she could see the transition to stud-hood, and said they should hang out some time. They did. And he did. He f*cked her. I don't normally use that kind of language - even though it's semi-bleeped out - as I think it's crude, but for a "C" word, "f*cked" is the best she deserves. Afterwards, he asked her to go with him to a concert for which he had front-row tickets. On the day of the concert, he never showed to pick her up. And didn't talk to her again.

How awesome is that story!??! It sure does beat my worst cock-blocking story ever, to which I got no redemption. A story of a one-time little guy getting his own come-uppance. It makes you want to shout out, "Team America, F*CK YEAH!" So, next time you feel like not saying something, or letting something go, f*ck that. Revenge is a dish best served hot and/or cold. Preferably both.

Sometimes, the way the world balances itself out is pure beauty.