In terms of sheer cleverness, I believe #ozziemisquotes is one of the funniest hashtags I have ever seen on Twitter. I can't say I'm much of a hashtagger or retweeter or follower of what's "trending" on Twitter, but I do make it a habit to follow funny people and tweet my occasional ridiculous thoughts and pretend the funny people I follow are my real-life friends. 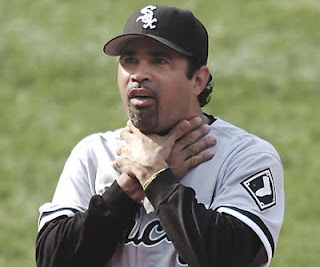 If you don't know, Ozzie Guillen, the manager of the Miami Marlins recently was quoted as saying, "I love Fidel Castro." Later going on to add, "I respect Fidel Castro. You know why? A lot of people have wanted to kill Fidel Castro for the last 60 years, but that (expletive) is still here."

There's no clear indication for what "expletive" he used, but I'd like to think he said "dickweed". Anyhow, praising Fidel Castro anywhere is probably a bad idea, but in Miami, Florida!?!? As coach of a team trying to court the Cuban community!?!? In a stadium that JUST opened in Little Havana!?!? As a follower (friend) of Daniel Tosh, I caught wind of #ozziemisquotes. He and what his followers tweeted brought great joy to my life.

@danieltosh - Ozzie Guillen on adolf hitler: "he just had that 'it' factor."

@Radwithab - Ozzie Guillen on Stalin: "He killed how many people? THAT'S GOOD HUSTLE!"

@SenatorCaeser - ozzie guillen on Kim Jung-Il: "you had to admire that man's choice of eye wear"

@ThrillFinn - Ozzie on Sandusky: "the only babysitter I trust"

@edwardkirk - Ozzie on MLK: To loud for my taste

@Bryson_TheBeard - Ozzie on Chris Brown "One hell of a good hitter"

@For_Jakes_Sake - Ozzie on Ghandi: "He never really stood up for himself."

@jd_tayl0r - "Casey Anthony... What a revolutionary in the world of abortion!"

@StateSunny - Ozzie Guillen on the DC sniper: "I wish my ace had that kind of placement"

@MikeDaCheeks - Ozzie on John Lennon "He did provoke that shooting"

@ScottHelton - Ozzie Guillen on the 9/11 highjackers: those guys knew a thing or two about teamwork!

What's missing is the technology "Ozzies"! How about:

"Ozzie on Steve Jobs: He didn't invent Internet Explorer now, did he? That's what I thought"

"Ozzie on Mark Hurd: In Venezuela, he would get a raise for what he did at HP. Did you see her rack!?"

"Ozzie on Bill Gates: I think it's great that he left Micro-whatever to help under-privileged retards."

Welp, feel free to join in on the Ozzie fun!