Home » wedding ideas » The Most Amazing Wedding Ideas Ever!

The Most Amazing Wedding Ideas Ever! 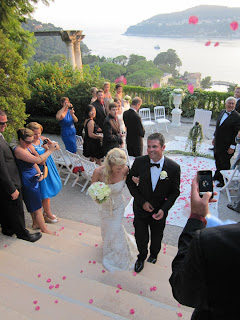 I wrongly assumed that I would be going to less weddings as I eased into my 30s. Wrong! I have four this year, which ties a previous high. Fortunately for me, my friends love getting married in convenient locations, like Villefranche, France and Positano, Italy. It's a short Southwest flight and Greyhound bus ride out of San Jose. Luckily, this year, all my weddings are domestic - with the exception of Maui - which kind of counts as international. 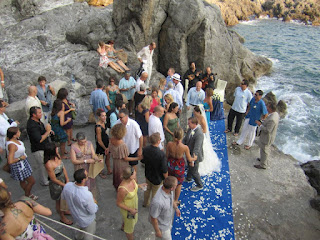 I, literally (not really), have been to all different kinds of weddings in all different kinds of locations. Napa Valley, Lake Tahoe, San Diego, corn fields in Arizona, backyard BBQ in Idaho, Las Vegas, Monterey, golf courses, San Francisco, Canada, Shanghai, the aforementioned locations in Europe... I've seen sand get mixed together during vows, along with wine, rocks, candles, and anything else that symbolizes the joining of two people in holy matrimony. In fact, if you're lucky enough, this year you'll get to see me marry two of my dearest friends!!! No joke. I may come off as an irresponsible, hapless, simpleton, but I have the voice of James Earl Jones and the charisma of a leper.

I'll soon be known as The Reverend SVB, following a long line of morally upstanding men of the cloth, whom history has shown are good with young boys and celibacy. My idol, is one named, Reverend Orvis, whom I hope will approve of my Reverending skills. With all that said, I'd like to tell you how I would one day like to be married. This is also not a joke. I want to stray as far from tradition as my Mother's sanity will allow.

- No Church - I believe in the values that the church represents, but I don't believe you have to attend church to be accepted by God. I also don't agree with their lack of tolerance towards gay rights and their dictation of what women should do with their bodies. That's why I don't want to get married in a church. I highly doubt God or Jesus had their views transcribed to select individuals and then wanted modern-day, self-appointed evangelists to judge us and condemn us off their interpretations.

- Musical Numbers - I am a huge fan of the unorthodox. That's why I LOVED the Chris Brown Wedding Dance, the Justin Bieber reception serenade to the bride, and the father daughter surprise dance medley, amongst others. As a humungous fan of karaoke and the healing, therapeutic powers and camaraderie it builds, it would be shocking for there not to be some sort of singing dance compilation at my wedding. I have toyed with the idea of making all guests perform numbers, either as a group, couple, or an individual - as long as you don't sing some self-serving, monotone piece where everyone wants to commit suicide afterwards, like Sarah Mclachlan. Think about how drunk and harmonious everyone will get just to build up enough courage to sing their song! Think about how fun it'll be for people to practice beforehand!!! It'll be like 5th grade talent show all over again, before people worried about how cool or uncool they might seem! I'm getting giddy just thinking about the anguish and, ultimately, unbridled joy I could put people through!

- Clothing - My friends Ryan and Nahal put together a pot-luck dinner that they deemed a "Cultural Pot-Luck," as you had to bring food based off your ethnic background. It was a great idea, as we had El Salvadorian, Persian, German, Chinese, Swedish, Russian, and Mexican food.... It was such much fun to prepare as couples. How cool would it be if everyone got dressed in the "formal" wear of their ethnic backgrounds?!!? It would be like a 'Pimps and Hoes' party, except much classier, and less gold teeth and fishnet stockings. Costume parties also make people less inhibited.

- Food - I would want the food experience to be a unique culinary explosion - filled with gourmet chefs flown in from around the world - like Pacific Beach, Mission Beach, and San Diego. All the top Carne Asada Fries chefs from Roberto's, Ramone's, and Cotixan's would come in for the most amazing night of food ever, followed by the most amazing bathroom night ever. Don't worry, extra Port-O-Potties would be brought in. For those that are vegetarian, you can get the fries a la carte, then afterwards you should jump off a bridge, because you are already missing out on life. In an alternate wedding scenario, I might have an intimate wedding with a 20 course tasting menu, paired with 20 different wines. Next taste on the menu would only be served after the glass of wine is finished.

- Location - Many people contemplate whether to have a destination wedding. On one hand, they think, 'maybe I can eliminate some people from coming if I have this wedding in Italy'.... WRONG! I went anyway! HAHAHAHHA. There is no destination on earth that is going to keep me from coming to collect my free food and beverage. If I'm getting that invite and have to give up a gift anyhow?, I will spend thousands of dollars just to make sure there is SOME return on investment!!!! As for my wedding, I want to have mine in a place where people can spend time together bonding. These will be my closest friends and I want us all to spend as many sober and non-sober moments together as possible. I worry an accessible wedding will mean that it will be one drunk-filled, hard-to-remember night, with early checkout from a hotel a real drag. Early candidates for my wedding venue - that no one's ever done - would be my high school gymnasium, so it could be like Senior Grad Night; or a Chinatown Dragon Parade Wedding in San Francisco, followed by a shootout amongst Triad gangsters.

- Booze - If I can't afford an open bar - God forbid - I will make sure that the parting gift is given out beforehand, because it will be a flask, filled with the cheapest vodka, whiskey, or tequila - your choice.

Welp, there you go. Leaving my wedding, one will be befuddled at the confluence of events that just took place. My goal is to leave you like it was a Cirque Du Soleil show - you can't really describe what just happened, but you know that it was something you've never seen and, frankly, AWESOME! Start kissing my butt now for an invite, because it will be the sh*t show of the century.

Hopefully, I will be walking down the aisle with someone other than myself.