R-O-I Dating: How Guys and Gals Differ When Assessing That First Date When girls go out on a bad date, you'll always hear something along the lines of, "at least I got dinner and drinks out of it." When guys go out on a bad date, you'll hear, "I F*CKIN SPENT $200 AND I DIDN'T GET SH*T OUT OF IT!!!!" Because, us guys, believe in something called "ROI" - which in the business world is called "Return On Investment". We may not like a girl we go out on date with, but the more we invest (cost associated in the date), the more we figure we should get something out of it. Unless you're dating Tim Tebow or Jeremy Lin, we want to play a game called 'just the entire penis'... or at least some topical clothes rubbing. We need SOMETHING we can tell our friends about after spending gobs of money on that trendy little SF eatery that only sells appetizers that you have trouble pronouncing like - quinoa or arugula or bok choy. Whatever happened to the good ol' Iceberg Lettuce!??! Crunchy and refreshing!!!!

I have a friend, who used to live in Europe - he is a dirty man-whore - well, this friend, he used to think of it this way, "if I spend more on a girl during a date, I start to wonder whether I should've just saved myself the time and pain of listening to her endless babbling and just gotten a hooker." I, with all due sincerity, do not believe in hookers. I have never paid for a prostitute, but I won't pass judgement on those that work in the industry or are clients. (Unless you're one of those dirty 50 year-olds in Thailand holding the hand of a girl who looks like she's 13. Yeah, you better look to the ground when walking past me, you dirty sonofabitch.) I think most guys start to learn that they should always meet up with new dates for drinks, rather than dinner, because the odds are against you that you'll like this girl - or vice versa. I learned this lesson after years of trial and error, because I always believed in asking out a girl for dinner. I just thought it was the gentlemanly thing to do.

The odds always started to work against me though, as I'd sit there and think about how this person probably wasn't going to age well, or how her intellect resembled that of Miley Cyrus. Then I'd have to sit through the rest of dinner hoping she wasn't going to order another drink (thus costing me more money) as I, myself, continue to order more drinks so that I could cope with her juvenile idiosyncrasies. Then thoughts of ROI take over. I'm not really interested. Should I play like I'm interested? But I'm not that interested, but I think she might be interested. But do I want to be interested? But now she's not interested. Do you do like the ass-out hug? Or do you go right in and just kiss em? All the while you're just really wondering, "are we going to get hopped up enough to make some bad decisions?" 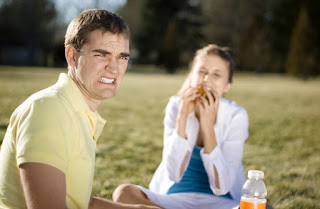 I'll tell ya, I play along almost every single time. If I have one drink, I am going for broke. If you have ever seen me stop at one, then you were on drugs and you need to check your facts. I will say that one time, on a night I had no capacity for bullsh*t (meaning I had choked the chicken earlier), I looked at a girl after she said something truly ridiculous and said, "That is the stupidest, most idiotic thing I have heard in a long time. And in another life, I hope you fare better." I got no ROI that night and the date ended rather quickly, but it felt so damn good. You should try it some time. Seriously. FYI - you can also be refreshingly mean and honest if you have a booty call waiting at home.

So, ladies, save my fellas some dough and call the date early if you've already classified it a bust. If you keep drinking, we're just going to think, 'game on.' Guys, save the dinner dates for a possible second date. In the first, drinks is the way to go. One drink is PLENTY of time to know whether someone is right for an extended evening... or possibly a lifetime. If not, your ROI on this blog has failed you.