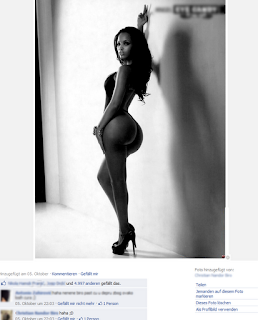 I've long since moved away from real-world compliments exchanged from one person to another in a face-to-face manner, instead, only finding comfort and solace from the "likes" I receive on Facebook status updates. I LIVE for those "likes". I LOOOOVE the "likes" I get when I post on Facebook. I LOOOOVE the "likes" I get on my blog even more.  It's like a badge of honor, giving my life validation to myself and strangers - whom I care about more than friends. It's like that validation you get from watching porn, and lasting long enough for that really awesome scene you would've missed if you'd blown your load in the first minute - like normal. That analogy actually made no sense, but it highlights the troubles of males as they decide: "should I go now? Or later? What if this is the best shot?!"

With that said, I'd like to point out the top Facebook posts that can almost guarantee a huge amount of "likes" - thus earning the recipient my jealous ire.

1. Babies - Within minutes of posting a baby picture, it's almost a given that you will see dozens and dozens of "likes". Heck, I feel bad if I DON'T like a friend's baby picture. You don't want to be that a-hole who browsed right past that baby pic as others were aggressively "liking" it. But when you're getting 87 "likes" on your new baby's picture, do you even notice which people are doing the liking? I appreciate each and every one of the "likes" I receive. The more you like, the more aroused I get over myself. It's awesome.

2. Dogs - Some people see dogs like humans. It actually disturbs me. I like dogs, but not like SOME people like dogs. I will never create a Facebook page for a dog, dress them in clothing, allow them to eat at the dinner table, sleep with me, or occupy any other function that a normal human being should be able to fill. That's why my bed is normally occupied by some train wreck from the night before. Less shedding, drool, and no weird feelings about getting morning wood while spooning a dog.

3. Marriage/In-A-Relationship - Who doesn't like a good old-fashioned love story, delivered to the world via social media!?!? It's a feel good story on par with jumping on Oprah's couch and shouting out to the world that you're in love!!! I often like to think about whether my friend's fiancee knows what a whore he/she was before they met and fell in love. I particularly like to "like" when I see my friends pulling talent that's much better than they deserve. Now that's a feel good story!

4. Social Annoyances - Kind of like Jerry Maguire's manifesto that turns his life upside right - The Things We Think, But Do Not Say - society now condones taking people to task. Especially those that disobey our unsaid social norms. I have three friends that I would like to mention now that I only keep as friends because of how long we've been friends, but I am not going to do that. Instead, I write vague status updates calling out their egregious behavior in hopes that they one day get it that I'm writing about them. But these friends are so narcissistic, only using Facebook to post their newest, latest, self-taken picture, and/or their latest travel trips or extravagance, that they don't notice that there are other people on Facebook. That's why I never "like" any post by someone who only logs on to post something wonderful they did.

5. Humor - These are my favorite. I love humor. Particularly my own. Don't you think that humor is downright sexy? If you can make me laugh, I probably want to bone you. (Of course if you're not that attractive, I only want to bone you once - like Chelsea Handler.) Self-deprecation is my preference, while mean and crude like Sarah Silverman is not. Follow Aziz Ansari, Daniel Tosh, and Mindy Kaling. They crack me up.

6. Sexy Pictures - I think it's so funny ( and equally annoying) when I see a girl constantly posting sexy pictures of herself, then you see a flood of "likes" and comments from ghetto-looking dudes along the lines of, "Daaaayam, looking good gurl. Wut you been up 2?!?" Add about 40 more grammatically incorrect comments from guys wearing sideways hats and no shirts, and you can call it a day. These girls (and some guys) are desperately seeking attention - pathetic - unlike a certain blogger in Silicon Valley pandering for your "likes".

7. Inspiration - There are some people who have everything work out for them. They wake up without eye-boogers, looking like a breath of fresh hair without any hair products or makeup. You can't picture them ever having an awkward moment. Unlike what Dos Equis tries to tell you, we hate these people. All the rest of us, we need inspiration in the form of Steve Jobs quotes, Jeremy Lin stories, Thoreau, Emerson, MLK, Angelou, Ghandi, and Leu. Hahahahah. I'm sorry. Thoreau was a joke.

8. Work Promotion - Because I only have top-notch friends, ones who wear sideways baseball caps and take profile pics without shirts on, they mostly face DEmotion. But on those rare occasions, promotions are celebrated with great fanfare. I, personally, "like" the post so that maybe that person will allow me to be part of his/her entourage in the future. Getting a table and bottle service in Vegas!??? I can help you drink the alcohol! Have an extra spot in your private jet?!? I have narrow hips and have mastered being quiet unless spoken to! Have spare bedrooms in your mansion!?!? I can wipe for you when you go to the toilet! Alas, it's going to take my friends a LOT more promotion than greeter at Wal-Mart to go-backs from the register. But when you make it, I'll be there waiting with my sanitary gloves on!


Well, there you go! If you want to exponentially increase your "likes", I recommend you combine several of these together. Heck, if you had a picture of a baby and a puppy both sleeping on your lover's bare chest, with a caption that read: "Mike/Michelle fell asleep after a long day at work, where he/she got promoted to Vice President. We were going to celebrate over a bottle of Dom P and chocolate covered strawberries, but this is how I found him/her minutes later. I guess it goes to show you, he/she starting out life as a mute/deaf crack baby CAN be overcome. I just wish he/she would stop snoring! LOL!"

Your Facebook status update would probably implode from "likes" - unlike my blog posts. Speaking of imploding, I must make good on my analogy now.