Home » USWeekly » Trying to Sell a Screenplay in Hollywood?... More Rewarding Than You Think

Trying to Sell a Screenplay in Hollywood?... More Rewarding Than You Think 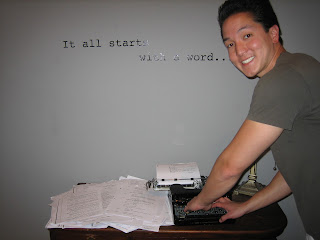 Trying to sell a screenplay in LA is probably one of the more difficult endeavors one can pursue. Yet, every year, millions of people watch a movie and think to themselves, "I can write a movie better than that..." And, of those millions, thousands actually attempt it - even less complete it. And, of those thousands, maybe a handful actually make it. But, 99.999999999999999% of them will never make it in that first year. Or the second. Or the third. My friend, Sara, sold a movie script, has an Emmy, came from within "the industry" and still has not had a smooth ride. I don't know if I was naive to think I could actually "make it" when I chose to move to LA for several months last year, but I'll tell you one thing: it was one of the best experiences of my life.

I see people who hate going into work every day, or count down the days on Facebook until the weekend, and I feel like people can make a choice. I guess I've always been fortunate that I worked in professions that were of my choosing. I had a fair amount of success in my chosen industries - Television News and Public Relations - and by "success," I don't mean money. I worked them because I loved what I was doing. And with that, the money came on its own. I wasn't motivated by wanting to drive a fancy car, wear expensive clothing, or make more money than my neighbors. What I wanted, and continue to want, is to be inspired, more than anything.

When I left the comforts of my home to move to LA, I had a screenplay in hand - a story that I thought was something I would go and pay money to watch. Now, I could only find one documented story on the web about anyone selling their FIRST and ONLY screenplay, and while I fully realized my chances of failure, I took the plunge anyway. Some writers had sold later screenplays they wrote, became successful, then were able to sell their first, but not their first when it was their only. It has everything to do with getting better at something the more you do it. Oh well.

Star Struck is the story of a struggling actor who pays a troubled Hollywood starlet to pretend to date him so that he can become famous. I think of it as a very marketable romantic-comedy. A little bit of everything for both the male and female gender. For the males, we were enamored with Entourage - a show that gave us a glimpse of what it would be like to be a movie star, everything from the fame, women, sex, partying, and friends. That's what I wanted to capture and give to my audience with my male lead. In the Hollywood starlet, I wanted to capture the culture that the world has become engrossed in: the Paris Hilton's, Lindsay Lohan's, Britney Spears'-train-wrecks of the worlds who have made TMZ, PerezHilton, and USWeekly mainstream names. I wanted to see the colliding of an honest everyday-man meeting the reckless world of a hard partying Hollywood diva, with both characters learning something about themselves on the way to falling in love. I saw it as Can't Buy Me Love meets Notting Hill meets Entourage.

Having now written a second screenplay, I can see that my writing definitely wasn't there. The language and dialogue could've been more succinct, less-forced, more clever, but I still believe 100% that the concept is sound and marketable. One of my main hobbies every weekend (besides excessive drinking and lewd comments in public) is predicting how well the weekend's new releases will perform, and I do quite well. I also do well in other predictions, like when I suspected that Facebook would be successful in 2010, and that there would be an iPad 2 following the iPad 1. I KNOW the concept of Star Struck is a good one - maybe one day my script writing skills will catch up.

Ultimately, to some, it may seem like a failure. Indeed, I do deem it a failure, in that I didn't get my screenplay sold. But I deem the entire venture to be a success. I went and met a ton of great people in the industry, I learned about things I never knew before, I wrote my second screenplay, I rekindled old friendships from high school and college, became even better friends with some, made new friends, tried new things, tasted new foods, but most importantly, I continued to dream, to hope, and to love.

I don't know if I'll ever sell a screenplay, but attempting to write one and completing it was like a childhood dream come true. Do you remember the elaborate fantasies in your mind about being a princess or a warrior, a cowboy or a cowgirl, playing house or in outer-space, and the scenarios you'd envision? How great was it to act it all out as a child and have everything happen exactly as you wanted it? Seriously, think back to that time. Imagine it. Too often in our lives, we hope for things to work out a certain way and they don't. I got to create a world on that paper, with characters I grew to love, and in the end, they lived happily ever after.

That's what I wish for you.

I live my dream every day, and while screenplay writing is back to being a hobby for me, I am working on an internet startup that is my current passion. Every day for you shouldn't get you towards that objective, but should START with "happily ever after..." Remember that.