Home » Monogamistically » Farting and Burping in a Relationship

Farting and Burping in a Relationship 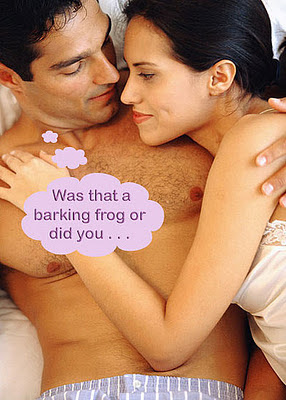 I have a confession. When I was a young boy I couldn't burp or fart around my friends. It was quite sad actually, because, as most young boys know, it was a source of amusement and a status symbol for how long and loud you could fart or burp. I might as well not even have existed and continued to hide in the closet with my sister's naked Barbies. Sigh. Physically, I couldn't burp. My friends would tell me to drink lots of soda. Didn't work. Suck in lots of air. Didn't work. Shove a plunger up my ass. Didn't work. I was relegated to making a pathetic-sounding noise in my throat, that under loud freeway conditions, might've been believable as a burp. But never the type where your friends would "ewww" in agreement, or laugh about. Heck, I couldn't even blow it in someone's face, because then I would be "outed" for the fraud I was!!! I'm SOOOOO ASHAMMMEED!!!!

As for farting, I just have never really been comfortable farting around people. How does one attain such comfortability!?!? If I had tried to force one out as a kid, I probably would've shat myself and hope that I wasn't wearing shorts that day. I would've told my Mom that the color from the fruit of the Fruit of the Loom ran together to form brown and that it was ridiculous that a boy of my age would still poop in his pants.

Fast forward 20 years. If you ask any of my previous lovers or friends whether they have heard me fart, I would be shocked if they said that they did. Burping, on the other hand, eventually came around. I don't know what happened, but if I get mildly full, I just can't help but let 'em rip. It's too bad my 5th grade friends can't see me now!!! I'll show you, you little motherf*ckers!!!! Not being able to burp is an illness, NOT SOMETHING TO TORMENT A LITTLE BOY ABOUT!!!!

Back to farting. I have witnessed many of my friends fart around their girlfriends/wives, much to everyone's amusement. It's obvious that I have the classiest set of friends, but how long does it actually take before you're allowed to fart around a lover? I can't say that I have ever had a girl do that around me and I'm not sure I would like it. On the other hand, did that first fart start out as a major embarrassment? Something to never be spoken again?!?! Or was it something like, "whoops!" Then everyone bursts out laughing!??!

The only times I have farted is when you're laying in bed in the middle of the night and you fart, and you jerk awake as if it were a seizure. First, I'm like, "where the f*ck am I!?!?" Then I'm like, "oh yeah, I hooked up with that train wreck from last night! Sh*t!" You then listen for the sound of her breath and hope it's deep enough that you escaped notice. The worst is when the bathroom at your new lover's house doesn't have a loud vent and/or is located too near to the bedroom. WTF was the architect thinking?!?! Those are the ones who MUST be comfortable farting at all times, because they obviously have no consideration for those with a flatulistic conscience. GO TO HELL, DUMB ARCHITECT!!!

(I made up that word, "flatulistic", in case you were wondering. It reminds me of when Martin Lawrence told Tim Robbins that his wife was "monogamistically challenged" in Nothing to Lose - which is one of the most underrated comedies of our time. Who knew you could come to this website to learn new words!!?!)

So, if anyone could tell me how this fart comfortability evolution happens, I would LOVE to learn about something I don't know. Because it's beginning to look odd how often I excuse myself to go somewhere - "Excuse me, I think I forget to water the plants outside, I'll be right back." In exchange, I will share with you what a plunger feels like up the bunghole.