8 Reasons Why You're Still Single 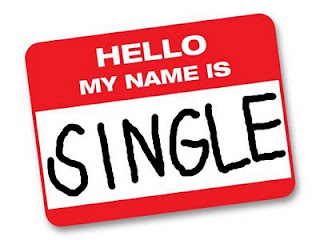 As I long since ran out of magnets on my refrigerator for all the new baby pic postcards and joyful holiday couple cards from my friends, it's given me ample opportunity to muse why some of my female friends are single and why others aren't. I'd also like to take a moment to note the controversial and possibly insensitive nature of this post as a reason for why I am also not currently married. With that said, let us begin.

1. You Have Expensive Taste - If you're making $32K a year and we see you wearing Gucci, Prada, and driving a brand-new Mercedes SLK, we're probably going to see this relationship as unsustainable. I've read somewhere that financial stress is a leading cause of divorce. I don't know if this is true, nor will I do any research on the matter since I am currently eating a pizza with my left hand and I am a self-dubbed "expert on relationships," but it sure does make sense, doesn't it? Us guys see that expensive taste and cut our losses after that first $200 date, where you ordered nothing but Grey Goose Cosmos. One, it tells us you have fallen for an overrated, marketing scheme vodka, and, two, you had no concern for the $14-a-drink vodka that is basically void when mixed with juices. Go for Ketel or Stoli if you want to impress a guy. That will only set us back $12-a-drink, but at least we'll know you get it.

2. You Had Sex With Us on the First Date - Wow. If I have a daughter one day, that is something that I will start teaching her at 3 years old. We will role play saying "no" on day 1095 of her life.

I'd like to think that I have the grace of a puma, the balls of a honey badger, and the charm of Scott Baio, but when a girl puts out on the first date, I gotta think she's been with hundreds of guys. That's not something I like going through my head. If you want to know if a guy loves you so, it's not in his kiss, Cher was lying - trust me - I fake it all the time. You will find out whether a guy likes you if he has enough respect to wait for you. I'm not saying make him wait forever, but a good four whole dates should suffice. Then again, there are exceptions, if you knew each other before, got set up by good, mutual friends, etc. blah blah blah. So don't email me saying, "WTF! Me and my husband had sex on the first date!"

3. You're Dramatic - Of all my girl friends who are married, I don't think I have ever witnessed, or can imagine, them snapping their fingers and going, "Whaaaaat?!?! Oh no she did-UNT!!!" The flair for the dramatics is something that a guy just doesn't warm up to - much like the baby-voice. In fact, when a girl starts getting angry at me - for forgetting her name, throwing up on her shirt, trying to put my tongue in her mouth, etc. - it makes me calmer, which makes girls angrier. It's like they want to see you rise up to their level of dramatics, so they don't look like the only crazy one at the bar. Other signs? When they're constantly demanding, issuing directives instead of subtle suggestions, or interrupting football games with trivial things like, "the baby is throwing up! I think we need to go to the hospital!"

4. You're Too Superficial - Now I know that everyone says you shouldn't settle, but almost 50% of the girls I knew in college ended up with guys they would've laughed at back in the day. The guys they married are going to put them on a pedestal and probably never cheat on them - because those guys scored above their looks-bracket. Would they have gotten the same thing with a guy they could've gotten in college?!?! Well, it's not college anymore. And those guys are probably hosting several venereal diseases, unemployed, and blogging in Silicon Valley for a living. That guy may give you passionate highs and lows, unbelievable witticisms, and devastating good looks, but it's questionable whether he'll ever give you the stability of a guy who will worship you.

5. You're Bitter and Negative - If you find yourself aggressively trash-talking people once they walk away, you should do some inner-soul-searching. If your thoughts constantly stream towards what that "b*tch" has and what you don't, or if you're more focused on why you deserve something and she doesn't - that's just not healthy. That negativity carries through to the rest of your life in bad ways and, in particular, rears its ugly head in the form of, "You didn't just... Already?!?! I didn't even get to finish yet!!!" That's your problem. You just need to learn to finish faster.

6. You Don't Have Your Own Thing - I stole that line from NeYo. I've actually quoted him like four times now in separate blog posts. Next to Chris Brown's "Yeah 3X" - NeYo occupies the rest of my Top 10 playlist - although Michael Buble is #10. Anyhow, guys need their alone times. That's why girls need to have their own friends, who do their own sets of things, with their own jobs, and their own hobbies. It gives us guys the chance to do all those secret things we don't tell you about. Sure, there are some clingy, jealousy guys who don't want their girls to EVER do their own thing, that's when you girls should actually run (but I'll write about that next time in a post titled: "Guys You Should Avoid"). When you have your own thing, the conversation can only be THAT much better at the dinner table and when you're alone, because you're both evolving as people apart and together.

7. You Don't Pay Attention to Detail - This runs the gamut. It may be that you don't ever ask us any questions, preferring to always talk about yourself. It could also be that you have slight B.O. - which is gross and reminds me of that commercial that goes, "strong enough for a man, made for a woman". You should do some research and buy that product. Or, it could be you have bad breath, hairy arms, smelly vagina, repulsive eating habits, or you fart or burp like a sailor. (I snuck "smelly vagina" in there between less offensive traits. Good one, huh?!) We want to know that we're dating a woman - let us hold onto that belief, even after years of marriage, babies, and regular trips to Fresh Choice on Friday.

8. You Party Harder Than Us - This topic has gotten its own, complete, separate blog post, but guys don't want to end up with a girl who gets drunker than they do. And if a girl were to get drunker than me, that would mean she was probably close to death and incapacitated to the point where her movements resemble that of an infant child. It's a major buzzkill to know that you have to be the responsible party every night. If not, she just may end up with one of those sleazy guys who's the wallflower every night until "last call," when he suddenly appears out of nowhere ready to pounce on the drunkest girls. Don't be that girl. On another note, don't be that guy. You're gross and you should go to jail.

I don't have all the answers. I only have most of them. Just remember, don't have sex on the first date. Unless he sings you Peter Cetera at karaoke...