Home » Will Smith » Occupy Wall Street FOREVER! Or At Least Until It Gets Too Cold

Occupy Wall Street FOREVER! Or At Least Until It Gets Too Cold 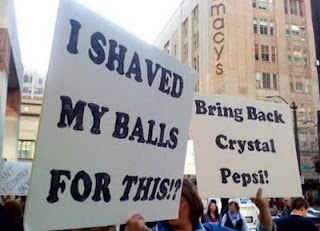 The Occupy Wall Street Movement has an identity crisis. Their ranks are littered with people that don't know what the heck is going on and have lots of time on their hands to beat drums. Heck, this takeover of prominent city areas, complete with free food, is the best thing to ever happen to the homeless since Will Smith portrayed one in The Pursuit of Happyness. Burning Man attendees have also been on cloud nine, since they've desperately been searching for something to do the rest of the 357 days of the year. Don't get wrong, I agree with whatever muddled message the "Occupy Wall Street" movement is trying to convey - as long as it's what I'm about to write here...

The top 1% of our United States population continues to grow richer and richer - taking a far larger percentage of the nation's income every year - roughly 24% - and controlling 40% of the nation's wealth! Should the 99% strike, "occupy", and do nothing, to get their fair share through some feeling of entitlement? It's a bit shameful, sure, but there will be free food! Before I get into a discussion of politics (don't worry, it'll be brief), let me say who I supported in Presidential elections since I could remember - even when I couldn't vote - Reagan, Reagan, H.W. Bush, Perot, Clinton, W. Bush, anyone but W., Obama. You could say that I was largely part of that group deemed, "the independents" or the "undecided". That was until I became a journalist. Journalists aren't all democrats, as Republicans and FOX News would have you believe, it's just that we see what goes on when we interview politicians and talk to real people. It does force you to see that the more compromising, humane side - if having to choose between the two - is the Democrat party.

Anyhow, this isn't going to be an attack on the entire Republican base - there are some things of their party I believe in, which includes a smaller government - this is more about one policy in general: Their absolute refusal to tax the rich any more to help out the national deficit, the middle class, the struggling economy, social programs, based on their belief that the rich are the "job creators". They won't budge on $250K+ income earners, nor will they budge on $1mm+ income earners... which makes good business sense, since the Supreme Court essentially eliminated caps on campaign contributions. I've met a few people in my life that make more than $250K a year, and I can tell you for a fact, those people are not putting even a small fraction of their new riches towards creating new jobs for people. Sure, some people are, but there are already tax breaks and credits for those that make that amount, hire, and are small business owners. Those 1% and 2% are putting their riches into buying fancy private planes, yachts, mansions... well, I guess someone's got to build those things.

Powerful, large Fortune 500 companies are hoarding their cash, and when they do spend it, they buy up competition and eliminate overlapping jobs at a far greater clip than creating them. The powerful get more powerful and when earning reports come out, they give them and their Board of Directors large, exorbitant bonuses. Those bonuses and salaries get larger every year. But, then again, who is there to stop them from voting to give themselves more money? When is the last time you heard a company issue a company-wide salary increase because of a record-breaking quarter? The rich are not the guardians of America's well-being. If they can, they'll continue to cut jobs and decrease salaries to improve the bottom line. Warren Buffet doesn't create many new jobs, but at least he wants to be taxed more. He's one of the few of a vocal minority.

America has a sh*t-ton of problems. This 9% unemployment is going to be hard to tackle. Sadly, the technology that we enjoy so much has a large hand in this. You can't just replace the thousands of video stores, book stores, and banks closing in every small and large community across America because you can now do what they offer through your cell phone. You also can't replace those thousands of jobs -with what? Manufacturing, assembly line work for that new technology?!? Sorry, that takes place in India, China, and other places much cheaper. You know those employees at those video and book stores that may not have been the brightest in the shed, but could do a darn fine job of placing a video back on the shelf? They aren't going to go out and start a new web company. Think about how many morons you meet in the world every day and times their level of stupidity by two, for the morons in middle America. They don't have the brains or the drive to do anything else.

The message that the Occupy movement should send out is the message of disgust towards corporate greed, the partisan Gov't politics that hold us back, and finally, the CORE MESSAGE of demanding that the super rich SHOULD pay a little more to help this great country out. Should they pay for our entire federal deficit? No. Our entire National debt? No. But the every day American has got to hold their politicians accountable for refusing to tax $1mm+ earners, even 3.25% more, to continue payroll tax cuts and save social programs.

Sadly, with the Occupy movement disjointed and the message unclear, the 99% could use a good Fortune 500 CEO to lead their vision and enact change. But, it's going to cost them... probably more than they have.