7 Things That Annoy Your Girlfriend

SVB Foreword: First of all, let me tell you that the SVB is now a published writer! Sure, I've been published in high school, college, been on TV in several cities, and wanted by authorities in several others, but now I'm in a magazine! It's like everyone else is moving forward in life, while I'm working backwards - from the most popular medium, in the internet, to print. Next year I hope to secure a job in the lucrative paper-route industry.

Alanna Bentley is my Editor at Register Magazine, based in Orlando, FL. She forced me to post her writings. So here it is below. (Kidding, I asked her.) You can read my article in Register Magazine on pg. 17 here. 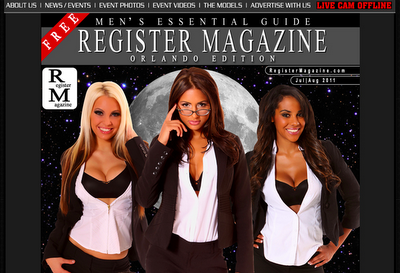 Getting sloppy drunk. This is a no-brainer. Anyone, man or woman, looks a lot sexier sauntering out of a club with cool confidence than stumbling out the door with a friend holding up each arm as the bouncer hollers, "You can't take that drink with you." Sure, some women are open to “playing doctor,” but not when the patient is at risk of slipping into an alcohol-induced coma. But hey, if you're trying to go home alone then by all means have another shot of Jager.

Turning down sex. Come on! Really??? Women assume (and for good reason) that sex dominates 90% of a man's thoughts (the other 10% is filled with money-making ideas that he never follows through with). It's the reason he drives a nice car, has his own place, washes the sheets, goes to the gym, etc. So it is a damaging blow to a woman's ego when he's "just not in the mood." It’d be like a giving a woman a limitless line of credit and having her turn it down because she “doesn’t really NEED another pair of black shoes.” Try to explain that.

Pestering her to try the "back door." Just because your slut of an ex-girlfriend preferred back-door fornication does not mean all women find it pleasant. In fact, no woman has ever met another woman who "prefers" it. We're starting to think men are making these stories up. If you tell her this is something you want to do and she answers with a firm "Hell, no!" then dump the idea or dump her. Remember your last prostate exam? What makes you think it feels any better for her?

The "How's your day going?" text. It takes a woman, on average 12.7 FULL minutes of verbal conversation to explain the nuances of exactly how her day is going and why. It is genetically impossible for a woman to answer this question in a text message. Men KNOW this. So when you send a text that reads, "How's your day going?" What you're really saying is, "I care, just not enough to talk to you." You're better off sending a text that says, "Hope you're having a great day!"

Putting the ball in her court. When you first meet a cool chick and you exchange numbers don't end the conversation with, "Give me call if you want to hang out." First off, if she gave you a legitimate phone number then she wants to hang out. Secondly, you're a man. If you're interested in her, pick up your balls and call her. By putting the ball in her court you're forcing her to pursue you and, frankly, that makes you seem uninterested and not worth her effort.

The rental-movie date. Let's face facts. When you invite a woman to "come over and watch a movie" it’s because you’re hoping there’ll be more coming than watching. This is not a valid first or second date, it is just an obvious attempt at sex without having to dole out cash for dinner. Save the quick, meaningless flings for the girls who answer your 1:45am texts.

Playing video games. Watching sports or playing video games are both great ways to spend the day. With the GUYS. A woman doesn't want to come over just to sit and watch you make it to "Arson investigator" in a riveting game of L.A. Noire. If that's what you plan to do at least tell her to bring a book so she can decide if she would rather stay home and give her cat a bath because even THAT would be more interesting than sitting on the couch while you ignore her for a digital game of cops and robbers.