SVB Forward: It's been awhile since my friend Saaara has been featured as a guest writer on SVB. She's been busy winning an Emmy. I kid you not. She's actually not the first friend I have that's won an Emmy, but she is the first to win one for a daytime soap opera. Interestingly enough, I have many friends who are outrageously successful and productive - making me quite an anomaly. Although, if you read my last post, I guess I do serve a purpose in friendship circles. "The SVB, although slow and dangerous behind the wheel, can still serve a purpose. Don't you go dying on me now!" 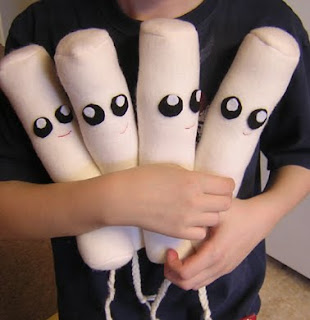 No matter how old guys get, they still seem petrified by a woman's menstrual cycle. I'm guessing if you're a boy and you just read that sentence, it sent shivers down your spine. Well, man up motherfuckers! Women have periods. And they suck. And supposedly menopause is even worse. But here are the top ten ways you can make things easier on us and on you. Trust. You don't want Aunt Flo's collateral damage to include a BLOW OFF.

10. Don't ever ask us if we're on our periods or if we're about to get our periods or if we're PMSing. Under no circumstances is this allowed. Sounds obvious, right? Then why do so many of you still do it?! We know what you're really trying to say is "cause you're being an uppity bitch" OR "I don't have to listen to whatever you're upset about, because if you weren't on your period you wouldn't be acting like Kate Gosselin on a bad day." You are totally allowed to say this...in your head, but this is a lose-lose scenario. If we're not on our period-- than you've just pointed out the fact that we're emotional basket cases all the time. If we are on our period, then you're a fucking dead man.

9. Get over your fear of period sex. And if you can't, then don't ask for a blow job unless you are going to cover that shit in Hershey's chocolate syrup. If we're feeling bloated, crampy, gassy, migraine-y, and suicidal BUT we still feel like giving you a blow job, then we'd be giving you one.

8. Remember that scene in No Strings Attached where Ashton Kutcher shows up with cupcakes and a Period Mix CD? Do that shit.

7. Don't treat us like we're lepers. Yeah, maybe we could use a little space, but when you're already feeling gross and ugly, it's just salt in the wound when you're boyfriend stops calling you and blocks you on Facebook.

6. Don't go down on us unless you're Edward Cullen. We said get over period sex. We did not say get over period oral sex. That story about the guy that pulls out that girl's tampon with his teeth is just an urban legend, right? right? RIGHT?

5. I know I'm reaching for the stars, sun, and moon here, but what if you made us a little period care package? Some Ibuprofen, a DVD of Steel Magnolias, those really warm cozy socks, an issue of US weekly, a box of tampons, and a bag of ho-hos. Just try it out and see what happens. We will most likely blow you. Well, I won't. I'll be too busy eating ho-hos and getting a panic attack when Julia Roberts goes into a diabetic fit (will somebody get her some god damn orange juice!)

3. But not so perfect where we feel bad about not being perfect.

2. Don't leave us for an older woman just because she's going through menopause and you don't have to worry about her raining blood on your parade. Didn't I warn you that menopause is even worse? Don't you know how many pills and creams and injections it takes just for Suzanne Somers not to turn into a man? And don't leave us for a girl who hasn't gotten her period yet, because that would make you a pedophile.

1. If we get too tired and cranky, follow us into the bathroom and offer to change our tampons for us. Hahahahaha, totally kidding. It was worth it just to see the looks on your faces. SUCKAH's!

For more from Saaara, head to The Blow Off!