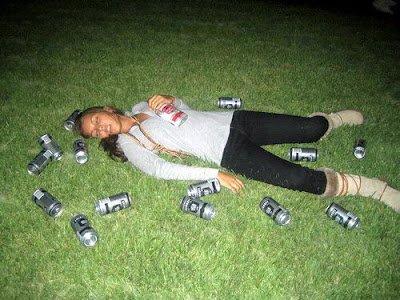 I have dated many lushes in my life - odd how that works out even though I only spend 40 to 50 hours in bars each week - and I have come to the conclusion, you can't date a woman who gets drunker than you. Fortunately for ME, this is very hard for anyone to attain. I view drinking as a competition as soon as that glass hits my lip. Yes, lip - singular, because my other lip never closes in on the glass as the vino, beer, or bottom-of-the-well vodka is guzzled down my throat like a flaming shot. I then giggle quietly before roaring my approval yelling out: "fill this b*tch up!" Then I quietly ask, "it's still happy hour, right? GOOD. That's what I thought, you sumb*tch!!!"

It's at this point that I am quickly marked by bouncers as a future target for a roughing up - once I've ordered enough drinks to cover everyone's paychecks. This type of ludicrous binge-drinking is acceptable by most women I date and a clear indication that they will have to be the "mature" one and stay semi-sober because it's obvious that I have no intention of responsibility or driving home. I like it to be known that all signs point to a quick death if given the keys to an automotive vehicle.

Now, I've seen that look time and time again from my friend's girlfriends and wives towards their drunk guys. That look of disapproval and the "your sloppiness is utterly disgusting, equivalent to that of a 2-year old eating spaghetti with their hands." For me, that look doesn't bother me. If you binge quickly enough, you will be blacked out by the time she is shaking her head in disapproval.

But this story has a moral. There was once a time when I was not the champion of immediate drunkeness. This has maybe happened twice in my life with women I dated, and I was miserable. In fact, one of those "times in my life" was with the guest writer of the previous post. I can tell you're not shocked. I'm used to being the one who blacks out, leaves his keys, wakes up with bruises in unexplained areas, an ID and credit card absent from its wallet, receipt stubs from several venues in my back pocket, and a burning sensation when peeing. Do you know what it's like to go out with someone who gets wasted, unconsciously flirts with guys, leaves her coat, loses her cell phone, and is a threat to get arrested every night?!?! It's fun sometimes when you're at home, but NOT when it's just you two at the bars. You sober up mighty quickly knowing that if you both black out, there's a good chance you'll wake up in Tijuana as a sex slave in a dark, deserted alleyway.

There's a great song by Trent Tomlinson called "Drunker Than Me" that came out in 2005 that conveys exactly how I feel. It's country, btw, the greatest genre of music and a hidden wonderland of female talent.

Isn't that a great song? I'm serious. Listen to it. My eloquent words will stay right where they are.