Home » True Blood » Gay Marriage and the Straight Man - It's all gay!

Gay Marriage and the Straight Man - It's all gay! 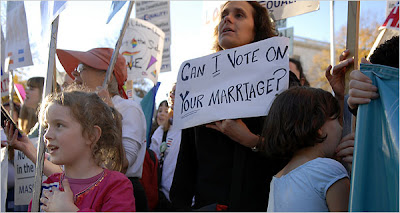 As one of the last remaining major civil rights battles of our time, gay marriage scored a huge victory in New York recently - making that 6 states that now allow two people who love each other to wed, regardless of race or sexual orientation. I couldn't be happier for the institution of love and those that choose to pursue it to its fullest legal extent. For too long, gays have been marginalized in society, hate crimes ignored, derogatory terms overused, all along the way towards making gays feel like second-class citizens.

Much like Native Americans were compartmentalized, Chinese lynched and excluded, blacks not given equal rights, and Arabs racial-profiled and stereotyped - almost everything that has happened in the past to minority groups (and is vigorously admonished by society today) is STILL what gays and lesbians must wake up to on a daily basis. It's shameful and a tragedy.
Do I feel a little uncomfortable watching two guys kiss on Glee? Yeah. Do I feel uncomfortable watching two guys kiss on True Blood? Yes. But you know what? I get more comfortable each time I see it. The problem is that mainstream media has been afraid to show it until now. Much like you never saw two people of mixed races kissing in a movie until the late 90s (and still not much today), this is something that helps ingratiate those virgin eyes. Mine included. And my eyes aren't even that virgin. They probably have herpes from all the things I've seen and done.
It's sometimes hard to be involved in such "macho" writings that involve bachelorhood, because you run into a lot of homophobic douches. It'll typically start out with gay comments like, "you're a fag," or "stop being gay." Sometimes it'll branch out into, "if a gay guy ever hits on me, I'll kick his ass." Really?!?! What if a girl kicked your ass for telling her she looked attractive? I don't agree with such blatantly stupid comments and I make my disgust for such comments known.

Frankly, I'm flattered when a guy hits on me. I say, "no thanks. I'm not gay, but I'm flattered," and then I walk with a little more confidence and feel a helluva lot sexier. Why not? Attraction is fairly universal. Gay guys don't hit on ALL guys, just like straight guys don't hit on all girls. Be flattered. It's not often that girls are going out of their way to say you're sexy. I chalk up my wins when I can get them!

But, really, this isn't about us straight folks. It's about a group of people that haven't been afforded the rights that we all have. I have many gay friends. I've been to gay clubs - most recently by myself last week to dance to some good music. Am I gay? No. Am I bi-curious? No. But I am Gay friendly. Also White friendly. Black friendly. Hispanic friendly. Asian friendly. It feels good to be open and tolerant, but feels even better for those who don't get the luxury of receiving it every day.

I stand aligned with the Gay community and against homophobic comments. Like the minority groups of our past, you will find redemption and, soon enough, vindication.