Best BlackJack Spots Around the World

You may all know me as a well-spoken, third place finisher at the 5th grade science fair, who drinks copious amounts of alcohol, and sleeps an ungodly (and unnecessary) amount of time. But anyone who REALLY gets to know me, knows that I am so much more. Take for instance the time I joined Big Brothers/Big Sisters to impress a girl. I even stuck with it for a few weeks... up until I found out I actually had to spend time with a young child during prime weekend hours. Although, I think my little bro secretly enjoyed washing my car while I lay in the back seat hungover. In the end, I had to break up with him on the phone. He cried a lot and it got real uncomfortable.

Anyhow, other things only very close people know about me? I have a weakness for BlackJack. (That, and Carne Asada Fries.) Having now played BlackJack in several countries/continents around the world, I shall name you the best places to gamble and what it was like being the drunkest, most belligerent, table-luck-ruining player in each country.

Dealer: "You have a five. I suggest you hit, sir." 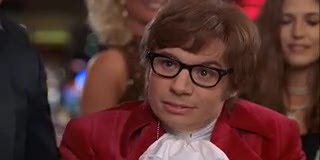 (Dealer hits, gets 21 and EVERYONE loses. The SVB is showered with "I'm-going-to-kill-you" dirty looks. The SVB rises from his seat and quietly asks for a security escort to his scooter waiting in the parking lot.)

Arriving in Macau a few years back was like arriving in Oklahoma in 1889 during the great land rush. (Impressive historical knowledge, wouldn't you say?) The Wynn Casino had just been built, with several more breaking ground, and the one time monopoly of Stanley Ho was no more. With that said, it was maybe one of the least fun gambling environments I've been in. Chinese people are serious about their gambling. Smoke filled the air of the Wynn, no cocktail waitresses, no rock music, and no scantily-clad females. I've had more fun going to church. I will say that I did see some of the most attractive Asian women in my life. That's LIFE! All 5'7, thin, with amazing curves. I thought I was looking really smooth when they all were giving me the "eye." That is until they said, "let's go to your room." And then I knew. I knew. The SVB is not THAT good.

Have you ever wondered what it'd be like to gamble in a museum? The answer's probably 'no' - and with good reason. You can't touch anything. You can't talk too loud. You have to go into a clear curved incubator to smoke a cigarette - which made everyone look like a pack of sperm in a condom (if sperm had faces and were smoking). Just to enter the Monte Carlo (the original), you've got to pay 10 euros. And you can't take pictures. Sound familiar? Upon sitting down at the active BJ table - all ONE of them - you're not sitting against James Bond, but like one other person in ALL of Monaco who will also play the 25 euro minimum. With no alcohol, no music, and people watching behind you, it was NO fun. But the history of it all, is amazing. It's like looking at your Grandpa and Grandma and seeing how your parent came about. "Hey! Vegas has got your eyes!"

I've played blackjack in Vancouver and Montreal, but there's only one main casino in each city and it's not that much fun. That's why when you go to Vegas these days, chances are, half of the people you'll meet are from Canada. (The other half are from California, of course.) I think the government owns most of the casinos in Canada, which means that you are supporting things like universal healthcare, citywide infrastructure, and higher pay for teachers -- things that we have no use for in the United States.

Now we enter the more fun portion of this series. Is there anything nicer than a long day of hanging out at the lake during the summer, or snowboarding during the winter, and topping it off in the evening playing blackjack with your boys at one of the many casinos in the area while the women stay at the cabin cooking and cleaning?!?!? It's like heaven! The only bad thing about Tahoe/Reno is that it's great for groups of couples renting a cabin, but not so much for single men and women looking for some booty.

First off, a post on my Australia trip is still forthcoming. That type of awesomeness is still formulating in my head. I started off with a little bit of gambling up in Cairns, an amazing little town by the Great Barrier Reef on the eastern shoreline, and it was nothing special. It wasn't until I went into the Crown Casino in Melbourne, on the southern part of Australia, that I was floored. From the outside, I wasn't expecting all that much. Once I went inside, it was A-M-A-Z-I-N-G. It's the type of place that you get everyone ready for because you know it's going to be a big all-encompassing night. The place is the largest casino in the southern hemisphere. Meaning it's bigger than any in all of Antarctica! The Crown was lavish, grand, huge, posh - there was endless sections of games, chandeliers, a chic food court, hot groups of women walking around in mini-skirts, guys who must work out, bars, clubs, luxury stores, a hotel, cinema, even a Nobu! It was like the Mall of America minus the kids and ugly people. Imagine Vegas' Cosmopolitan times 100.

Beaches and sexy latin women is a deadly combination - throw in blackjack and it's ALL good.

The difference between Australia being #2 and #4 is strictly a personal preference. I happen to LOVE a small beach town and the personality that comes with it, that's why Costa Rica is #2. I'm not talking about the gambling in San Jose, but more like the gambling in Tamarindo - on the coast. I just found it great to step out of your hotel and go to the beach all day, be served delicious, inexpensive Costa Rican food while eating next to an Iguana, body surf, watch the sunset, shower, put on some flip flops, and then gamble at a boutique casino across the street before hitting up a beach-atmosphere bar/club with no dress code.

What can I say about Las Vegas? I've spent more nights there that I can't remember than anywhere else. I don't know of any place that lets you get away with more. This is an entire city built around being a "big deal." People count down days until their next Vegas trip. Whether you're a country bumpkin from Louisiana or a city-slicker from New York, you can stay at Hooters Hotel or at the Bellagio and live out your rock-star fantasy. Sex. Drugs. Loud music. Helicopter dick. Reckless gambling. Almost everyone is coming here to make at least one mistake during the weekend. With that in mind, playing blackjack is a wicked good time amongst people who are ready to party, lose, and lose big.


Well there you have it. The definitive list of the world.

Craps may have the best odds, and poker may be the most intellectual, while roulette is a game for morons, but blackjack is a game that puts hair on your chest. And judging by the hair on my chest, it's safe to assume that I have lost money in all 8 locations I have mentioned... but, gosh darnit, I will still double down with your 10 showing. But can you hurry it up on the free cocktail before I lose all my money!??! It's embarrassing standing over the table waiting for the cocktail after you've lost your last hand.