Home »Unlabelled » Stigma in Internet Dating? Time for the SVB to Investigate...

Stigma in Internet Dating? Time for the SVB to Investigate... 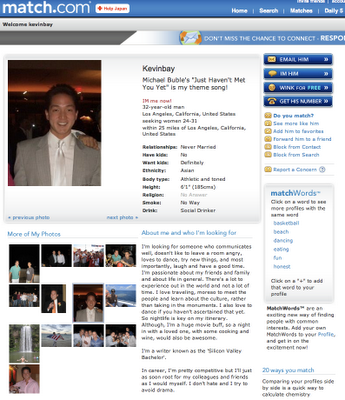 I'm on Match.com. There. I said it. Whew! Feels good to get that off my chest. Now I know what you're thinking - "Kevin is such a smart, good-looking, funny, sexy, humble, modest, confident, muscular, once-in-a-generation, most-eligible, voice of an angel, stud-muffin of man hunkness- why would he need to go online to find a woman?" Well, I got news for you, sisters - I don't. But I am curious as to the entire experience and how it differs from offline meet/greet/and date. As I've floated the idea to my friends, I'm surprised by the number of them who have actually tried it. The reviews are mixed. Some say the networks are filled with weirdos, another found her fiancee, and others say the people they met up with looked nothing like their pictures: "40 pounds heavier," "10 years older," "a different person altogether." Thanks to Colin, on the PR team at Match.com who hooked me up with a membership at both Match.com and Chemistry.com, I will now be able to investigate freely. Eat your heart out, Mike Wallace.

I know there's a stigma involved in "meeting someone online," and there's always that tinge of embarrassment when telling people where you met. But there shouldn't be. I honestly think it's a viable way for many people to meet each other.

Some people volunteer their time in third world countries, others run marathons for cancer patients, I, on the other hand, will date copious amounts of needy, socially-awkward, fast-track-to-marriage-oriented women. As I've stated many times before, I believe there's no validity in my mother's assertions that I will not find a woman to marry in a bar, club, or massage parlor. It's only been 11 years of trying, mother, what do you know? You've been married for 40+ years!?!? And that makes you an expert?!!? Stick to the kitchen!!! (Just kidding.)

For the record, I have been a "free" member of Match.com for three years, because, at one time, a friend and I were going to start a web company based on online/offline dating. I joined every network to see how "the flow" worked. How they get you to go from "free" to "paying." Well, Match lets you create a profile and even lets you browse women in your area and "wink" at them. Women can "wink" and email you, but you can only "wink" back. If you want to reach out to them, you must pay them. Like Billy Crystal said, "Ahgh Hagh!" (The 'g' signifies that deep gurgle he made in his throat as he said 'ah ha' - but I didn't know how to spell it.) So, even as the website my friend and I were going to start went dormant and gathered dust, I kept the profile up.

I probably averaged about a wink a week. Not bad for someone who did nothing but post gratuitous pics of himself flexing in the mirror using a camera phone. Out of all those winks, only twice was I tempted to put down some money to get in touch with the girl. I thought long and hard over it as I ate my Swanson's Salisbury Steak Hungry Man dinner (my fave!), thinking that maybe I could embed a code into my bio so that these girls could find me offline - something that would direct them to SiliconValleyBachelor.com... Then I thought that would not do me any favors, so then I did what I normally do with $30 and spent it on three Maker's Mark on the rocks at a local dive bar. (Shout out to Oasis Bar - where everybody... at least two people know my name.)

Anyhow, now I shall embark on a mission, similar to Rob Schneider as Deuce Bigalow or Steve Carell while speed-dating in 40 Year Old Virgin, but I'd like to think of myself, not as those two, but more like Daniel Craig's James Bond as he exchanges clever banter with his love interest on that train (she dies, fyi), or I'd like to think of myself as Edward in Twilight and give my dates cold, unreadable facial language, while only breaking my silence to spit out unintelligible sentence fragments. (Bella should've died, fyi.)

Well, stay posted and I will update you on my experiences.

Sincerely,
Kevin L.
The SVB
Or, as I'm known on Match - "Thor, stallion of men and conqueror of women."