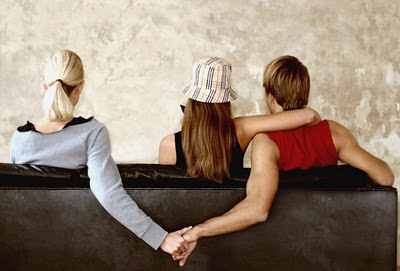 While doing research on the traits of cheaters, I was alarmed to find that I possess roughly 60% of the most common dispositions - which puts me at the D range of grades. Can you say "passing!" If only I had done so well in college... Below, I summarized the traits of cheaters from three different websites.

Website #1 (link):
Trouble saying "NO"
Very controlling or very easily controllable
Abuse or Lying
Neediness
Oversensitive
Use of the word "SHOULD"

Website #3 (link):
Needing attention from the opposite sex
Needing excitement
Interest in bars and clubs
Need to have new friends
Flirtatious
Independence

Let me make something clear now. I have cheated before. I'm not happy or proud of the fact. It was July 7th, 1989, and I stayed in jail through a third roll to avoid landing on Boardwalk. I've told no one until today. I'm deeply ashamed. As for cheating on women... yes. Ladies, you've asked me many times before if I've cheated and I typically respond with, "I like to look forward and not dwell on the past." Or, I will look at you seriously for a moment and then feign disgust and shock while saying, "how DARE you ask me something like that! After ALL we've been through...." Then I will fall to the ground in convulsions and fake a seizure.

Just like I don't think people should get married in their early 20s, I don't think you can judge a person by what they did in their late teens and early 20s. People just haven't fully developed and experienced life yet as an individual. You move out of the house at 18, you have a support system in college until 22 - at what point have you made strides to settle into your own skin? I made leaps and bounds discovering who I was as a person all the way into my late 20s. Then after that, my maturity stalled, quickly deteriorating to the equivalent of a small child. BOOBIES! Yay!

Let me tell you what led me to cheat on my college girlfriend - to which I am deeply and forever remorseful. And also, why I think it won't happen again.


- My parents never allowed me to make decisions. It was always, "here's what we ordered for you to eat. Now eat it." Or, "because I said so." Or, "I'm going to beat the sh*t out of you with this tennis racket if you say 'no' again." Typical parent jargon. How is a child to learn how to break up with someone when all he's ever learned is to comply and not make people angry? When I become a parent, I am going to force my child to think critically and ask them questions, so that they have practice learning how to make decisions and to say 'no'.
- My first hookup, Junior year of high school, hooked-up with another guy. Even though we were never boyfriend/girlfriend status, I was immensely hurt by her actions. It was a huge hit to my ego and I followed that sadness up with wanting to "beat the sh*t out of the guy with a tennis racket." (Thanks Mom!) I ended up getting over it, but not before being set backwards with a lack of trust in females. I never wanted to feel that pain and vulnerability again, naturally.
-  I went out with a girl Senior year of high school and Freshman year of college for a total of 2.5 years. (To this date, my longest relationship.) The relationship should've ended after a year or so, but she would always say ridiculous things to me like, "if you ever leave me, I'll just die." And other variations, like, "I love you SOOO much, don't ever leave me, please. I don't know what I'd do." Her eyes would well up with tears. This is no joke. It got to the point where I was just like, "I guess I am going to have to marry this girl."  And then... she ended up leaving me for another guy. WTF? I had lost 1.5 years of prime frivolity!
These three incidents led me to be commitment phobic for most of my college and early adult years. It was like I was making up for lost time. Looking back, the reason why I cheated was because I didn't have the courage to hurt someone and look them in the eye and break-up. I also didn't possess the necessary tools to communicate problems with someone I was dating. If there was a sexual problem, my remedy would be to get us both sh*t-can wasted so that I could deny responsibility the next morning when she would say: "did you know what you tried to do last night?" "Um... no. But, errrr... we better get going if we want to make it in time for McDonald's breakfast!!! Meet you at the car!"
Becoming a broadcast journalist, I think, was a manifestation of what I went through as a child. It allowed me to finally ask all the questions I wanted and to harness my devastating good-looks for all to admire. God, I loved watching myself on TV.... so hot. As I grew through critical reasoning in journalism and numerous STD checkups, I found myself more and more willing to verbally communicate how I was feeling with significant others. Sometimes it would lead to a stronger mental and sexual relationship, other times it would lead to her shaking the sh*t out of me. But the key was being able to sit down with someone and talk. Talking leads to respect. It's harder to cheat on someone when you respect them.
For your loved ones, you owe it to each other to be able to positively listen to each other's feelings. I don't think anyone wants to end up like that one ugly gal from Sex and the City who stopped trimming her private area and putting out for her husband, or Jennifer Connelly in He's Just Not That Into You. You have to have positive conversations and try new things to keep the spark alive. I can say "no" now and I know not to allow my empathy to force me into another relationship. Nowadays, the only way I'll agree to a relationship or say "I love you," is to get someone in the sack. And afterwards, I will have the courage of my convictions by telling that person, "I don't think this is working out." And then follow it up with, ".... sooo... you wanna have breakup sex now?"

Some of the research I did on how to reform cheating behavior said to avoid going out to places that are filled with temptations like bars and clubs - but I think that has little to do with it. You will only fall into temptations if there's problems at home and with yourself. You can't handcuff someone for the rest of their lives in hopes they won't cheat. At least that's what I believe, theoretically. I can't say that I'm living proof... well, for much of anything, except that beautiful people don't have all the answers.

Constructive dialogue. Openness. Respect for yourself. Respect for your partner. You may not stay together forever, but at least you will have the courage to part ways with someone amicably and not cheat.