By Kevin Leu • 5:08:00 PM • Facebook How to Not Lose a Girl in Ten Days Silicon Valley Bachelor TechCrunch The Blow Off TMZ • Comments : 1

When I'm not reading my own blog posts and laughing at them over and over - occasionally unzipping my pants in the process and locking my door - I have a voracious appetite for current events. I read all the top news stories on Yahoo, then continue with what's going on in the venture capital/business world on TechCrunch before moving onto more serious fare at TMZ. Every once in awhile I'll stop over on certain links that my friends post on Facebook, but I rarely ever return. One blog that I do return to is written by my new friend, Sara, called TheBlowOff.com. After getting over the initial disappointment that there would be no felatio involved, I found out that I actually like to read about people blowing each other.... off, that is.
As the SVB, I have had my fair share of blowing people... off, that is. It's one of my favorite pastimes so that I can avoid the responsibilities of a relationship and having to listen to a woman when she talks about her feelings. Anyhow, Sara and I are doing guests posts for each other! She's like my Dr. Phil and I'm Oprah. Although, she may make the argument that I'm Robin and she's Batman. But, if I must play second fiddle, I prefer Quagmire to her Brian. Or even The Situation to her Snooki.... the Whopper to her Big Mac... the Cashew to her Macadamia Nut....
Without further ado, here is her first entry for SiliconValleyBachelor.com, titled:


How to Not Lose a Girl in Ten Days 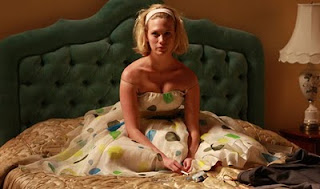 Boys, you need to do better. Maybe some of you aren't pulling your weight, because you're dating girls you don't really want to be with...but some of you have awesome girlfriends and you're still fucking that shit up. So, here's our top ten list on how NOT to lose a girl in ten days. The below has been compiled from years of valuable "girl talk". Pay attention. You might learn a thing or two.

10. Sending a text message takes about 15 seconds. Don't disappear without a trace for two days and then tell us you didn't have time to text. Look, we're sorry to break it to you. You're not Don Draper and this isn't the 1960s. You live in the 21st century and you have a cell phone and the internet. Which means you have absolutely no fucking excuse for being M.I.A. And maybe you mean nothing by it, but trust us, we have post traumatic stress disorder from guys we've let do things to us we never thought we'd allow...that never called again. Don't test us.

9. Wait, guess what?! We have the perfect way for you to live out your Don Draper fantasy! Yes, maybe in the 60s men chain smoked, drank martinis for breakfast, and banged their secretaries without the guilt--- but do you know what else they did? They paid for dinner. Seriously, there was no going dutch back then. And that's why a very small part of us ladies secretly envies Betty Draper. We're not even asking you to treat us to dinner all the time, we're asking you to treat like one out of every three times. And it doesn't count if you ask us to put in the tip.

7. It's okay for you to like our friends. We want you to like them. It's not okay to casually reference how attractive they are. Cause our friends won't sleep with you. But I have a feeling yours might conveniently space out on that whole "bros before hos" thing if propositioned. I'm just sayin'...

6. Last weekend we went to your friend's impromptu house party and stayed til 3AM. This weekend we're at my best friend's wedding. And I'm a bridesmaid. And no, we can't leave at 11pm, so stop looking bored and stop asking if I'm about ready to go. Get another drink, get on the dance floor, look happy, and bust a motherfucking move.

5. Speaking of busting a move: there's a reason us ladies have huge boners for Justin Timberlake. Guys who can dance are sexy. We don't even need you to dance well, you can just stand still and nod your head and blink your eyes and we'd be happy. I mean, I don't get it. You guys used to dance your asses off at junior high dances. Can't you just pretend you're twelve again and never touched a boob?

4. If you ever choose anything (booze, the dudes, TV) over having sex with us, you're a fucking idiot. And fucking idiots don't deserve blow jobs.

3. We know you hate to cuddle after sex, but do you know what we hate after sex? A sweaty sprawled out naked guy who's penis looks a lot smaller than it did five minutes ago. You know what would make us forget about that? Cuddling.

2. Flirting, in small doses, is healthy and harmless. I know you don't know this, but your girlfriend likes to flirt with other guys. But she doesn't do it in front of you. Or on Facebook. Or in a text message. Or anywhere you will ever find out about it. If you guys don't man up and do the same, I guess us gals will have no choice but to take our mad flirting skills public.

1. Four words that will make all the difference. Learn them, love them, live by them.
"You look really pretty." Yes, we're that easy.