Smoking Kills... and Makes You Ugly (Literally and Figuratively)

Smoking is just about the dumbest socially accepted thing you can do.


Now, I don't have that many pet peeves, because I find it important to keep my life filled with positivity, but the few that I do have, are flakiness, last call for alcohol, double hook bra straps, and smoking. I realize that some of my dearest friends are smokers, but it's a topic that I find very important. I'm not talking about social smoking - when you have a smoke or two when drinking - but I'm talking about the smoking you do when no one else is around. The kind that tells you when you should have a smoke and not the other way around. The one that makes you go out in the freezing cold by yourself to satiate your addiction. The one that has you sweating bullets when you have to board a flight longer than 3 hours.


In potential dating prospects, I find it repulsive and an absolute deal breaker. It's just about the most unsexy thing a person can do. I don't know one person I've met in my lifetime who thinks smoking is "hot". If you're doing it to impress a girl, just face it - if you weren't getting laid before, smoking is not going to change that. I understand that it may seem like a cool thing to do when you're younger, because it gives you a little bit of a high as you have a cocktail or two. But when you stop having control over a substance and it has its grip on you - forcing you to smoke every hour - that's just pathetic.


I also see it as a major sign of weakness in people. Come on - to need a smoke to help you deal with stress?!? Weak. Grow some balls and learn how to deal with things without a controlled substance. Smoking is low class. I have never seen someone smoke and thought they were classy people. On top of tasting like ash, it has MAJOR repercussions on your health: first and foremost being lung cancer. Secondly, you do realize that you will age yourself like no other substance. I don't know anyone who has been smoking their whole life and is 40 and doesn't look 50. And that's 50 if they're lucky!


Take a look at the pictures below of a study done with twins. One smokes and the other doesn't. Do you see a marked difference in the way they appear? Can you guess which one smokes? 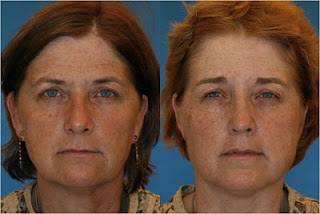 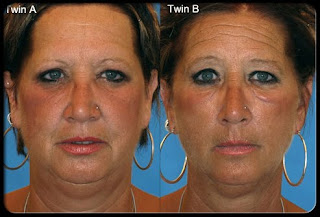 Granted, we would need about 10 shots of Bacardi 151 to even consider hitting on either twin, but you get to see a definitive side-by-side look at what smoking does to you. It's not like those posters we saw as kids about what your lungs look like when you smoke. I don't think that dissuaded anyone. No one cares about what they can't see. Now, I know we should all marry for personality and compatibility, but there is not one guy that I know who wants their wife to age 10 years faster.

For guys, the effects are compounded - decreased fertility, reduced athletic performance (meaning your sexual stamina is going to get worse and worse - which in my case, can't happen as I only have 3 minutes to begin with), bad skin, bad breath, male pattern baldness... and that's not to mention the GREATER risk of cancers. Read a list here of all the things that you subject yourself to just for a habit you started to "look cool."

I hesitated in posting this, because I do know a fair number of smokers - but I will tell you that I have always been concerned for their health and well-being because of it (plus, I don't want to hang out with ugly people). I may not mention it, because the SVB has a reputation for public-drunkeness and irresponsibility, but I do care. I have a cousin who recently started smoking and it bothers me because I love him. Please, everyone, you don't need a smoke just to 'kick it' - and no one thinks you look cooler. For your health's sake and for those you love, make an attempt to put down that smoke and live a few years longer and a lot of years healthier.

I love you... and not in a drunken way. But in real life.