Home » The Wedding Singer » Flying First Class... Why They're Better Than Us

Flying First Class... Why They're Better Than Us

There’s a quote from my second favorite movie, Jerry Maguire, (27 Dresses is my first favorite of course!), where Renee Zellweger is listening in on a discussion in First Class and sighs: “First class. It used to be a better meal – now it’s a better life.” Recently, I had the opportunity to sit in Business Class, which I can only assume means First Class would be somewhere along the lines of heaven. When it comes to flying in airplanes, I am no stranger. I have flown on hundreds of flights in my lifetime and had a nice mile-high session of pooping on each one – in case you were wondering. In all those instances, never once was I upgraded to First Class/Business Class or even given an accidental smile from a flight attendant.

On my way to JFK, via SFO, then on towards Madrid, I decided to book my own luck and go Business Class the whole way. I gotta tell ya, Renee Zellweger was right. First off, we had our own special check-in line at the counter, then I got to bypass about 300 people straight to the front of the security check-in. I actually broke out laughing as I walked passed all these common humans, that I now like to think of as farm animals. Once I got past security in a matter of minutes, I moved onto the Admiral’s Club – some lounge that you can go into if you’re flying First or Business Class. It was like getting VIP access at the club to meet Justin Bieber – not that I have any idea who he is….

After trying not to walk around the “Admiral’s Club” looking like a first-timer, I casually stole all the hand lotion from the bathroom and mints from the snack table. It was quite an impressive haul. My shorts haven’t looked that full since…. let’s face it – never. I then went to the bar and tried to throw around big words amongst the blazer-polo-wearing-crowd. I would say things like, “have you seen that precipitous drop in the NASDAQ?!” Or, “I sure am glad that the Euro is dropping so rapidly, it’s been a long time since I’ve had to pay less than a million dollars in taxes on my estate in the Greek Isles! Muahahahaaha.” Or, “Let’s put another shrimp on the Barbie!” They loved me. I would throw peanuts in my face and blow flames from my butt using a lighter.

Finally, when it was time to depart, I swiftly moved to my seat in the upper-echelon section of the plane and put my baggage in the overhead compartments where there was ample space. I even placed it the long way and stretched out the shoulder strap to fill up the space. Then, I sat down next to a decent-looking girl, who obviously had the hots for me. Earlier in the day, while doing research about American Airlines Business Class seats, I found nothing but negative reviews. As someone who’s been on over 200 flights, I would have to say those fools are spoiled pricks. I had champagne before the flight even took off! I felt like Adam Sandler in The Wedding Singer when he had to buy that First Class ticket to catch Drew Barrymore. Then, within minutes of taking off, I had lemon chicken served over a salad featuring almonds, strawberries, and feta. I asked for a glass of wine and they kept filling it up before it was even a quarter of the way empty. I probably went through an entire bottle in 20 minutes. I wanted to make love to my flight attendant right there. She was 55, at least, but I think I’m in love with her. 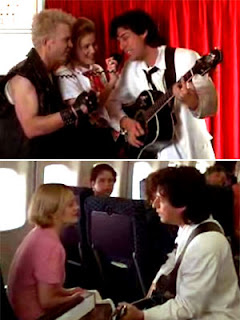 As I finished watching How to Train Your Dragon, apparently rich people can also own dragons, I decided to call it a night and recline my seat to an ungodly angle that I never imagined possible on a flight. I looked over towards my love interest/seat neighbor/stranger, who was sound asleep, and whispered, “sleep tight, my love, life doesn’t get much better than this.” I think she stirred, so I quickly shut my eyes, but it was a false alarm. Breathing a little more softly, I placed my head inches from hers and thought, ‘who knew that the first time I would sleep with a woman would be on a Business Class flight next to a stranger whom I don’t even know.”
Renee Zellweger, the Confucius of our time, you’re so right: First Class is much more than a better meal - it’s a better life. SSshhhhhhh!!! I think my neighbor is waking up. I hope she’s not reading over my shoulder, because this could get really awkward….

Post Script: On my very next flight, I sat in First Class and orgasmed. This ish is ridiculous. No wonder these f*ckers always look so smug as you walk past them to the commoner's section.