Rules of College Crashing: My Return to College Frat Life

Now that I have decided to pursue professional lothario-ism, I have a lot of time on my hands to try new things - like reading (don't recommend), falling asleep at any point of the day and in no defined position, and moonlighting as a college student at various universities. The latter has been a particularly fruitful endeavor. Of course, it's all for scientific and research purposes and NOT a shameful ploy to hit on college women and their young, easily impressionable and influenced minds. 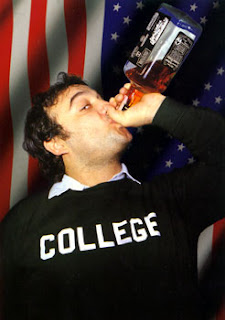 My cousin is a junior at Santa Clara University and a member of a fraternity, which I shall not mention, lest the national organization opens up an investigation and decides to ban me from their houses all across the country. When I was younger, I watched an episode of 21 Jump Street where Richard Grieco and Johnny Depp go undercover at a high school. They play football and do other things, but in my mind, they banged chicks behind the scenes. Television is real, but sometimes they don't show the good stuff. Ever since that show, I have wanted to turn back the clock. In Junior High, I wanted to go undercover in Elementary School. In High School, it was Jr. High.... and so on. Now it's time to fulfill my destiny. I'm like Rodney Dangerfield going back to school, only I will do no studying or attend any classes - this I promise you. I will only engage in reckless, irresponsible college behavior.

My first night back I didn't fare so well.

I think I had built it up too much, and in turn, my cousin has not invited me back for an encore performance - even after having asked him repeatedly. Allow me to explain. I have a very youthful face -- some would say model good-looking -- so upon taking out some of my cousin's fraternity brothers for dinner, all of whom thought I was a college student, I thought, 'let's go with this!' After a few beers and a third of a handle of Captain Morgan's, I was liking this idea more and more. My cousin and I decide to go to his Fraternity house where my flask of Maker's Mark earns me the envy of his fraternity brothers and gives me instant credibility. They all like me because I drink hard and fast. Friendship in college is so easily earned.

After the Santa Clara Men's Basketball team loses a heartbreaker in the closing minutes against Gonzaga, some more Fraternity brothers come storming into the house. The largest man of the bunch proceeds to grab a plastic handle of vodka with a name I've never heard of and a $7.99 tag off of the kitchen table and promptly pounds half of the bottle. I look on, admiringly, and decide this kid is my new best friend. I tell him to hand me the bottle and I promptly take two shots of the worst vodka I've ever had in my life. Because I want this guy to be my new best friend, I talk mad smack to him and challenge him to a drink-off. He tells everyone he likes me. I am happy.

This guy outweighs me by at least 100 pounds, but I sincerely believe that I can best him. Even though I have been drinking for 3 hours prior, I have no doubt. That is my last memory. I wake up the next morning with puke all over my jeans and scramble out of my cousin's house to make it to work on time. He tells me later that day that I shouldn't worry about last night. Always a key indicator of having done something completely idiotic and embarassing. I don't know if ignorance is bliss, but my cousin tells me I puked all over his bathroom and spent a considerable amount of time in the Fraternity house bathroom. The worst part is that I didn't get to hit on any chicks. But it's okay, I have many other cousins in college, whom I have yet to embarass.

I have outlined a set of rules that I will one day use if I can manage not to barf all over myself by 11pm:

- This will net you many, many friends and instant access into the inner circles of the wildest drunks in college, who also happen to be the most popular. Of course, you could always crash a college party withOUT acohol, but is the point to get drunk on someone else's dime, or to take body shots off of college campus's finest?

Rule #2 - Come prepared with a good back story.

Just like Wedding Crashers, you need to solidify your back story in advance. Being Pimps from Oakland, or Cowboys from Arizona, is comparable to you saying you're a Communication, Sociology, or Psychology major. Too many degenerates in those majors and they typically fill sorority and frat houses. That's throwing up a Hail Mary in the first quarter, because you risk someone saying, "oh really? That's my major. What classes are you taking?" Then you're screwed.

Rule #3 - If unprepared, just say you're visiting friends for the weekend.

Use your old school as the alias, because you're bound to know enough to get by. Then, proceed to get more drunk than anyone else, because at that point, everyone will know better than to talk about anything else that doesn't have to do with sex, booze, shots, sports, late-night food, and quote movie lines from Wedding Crashers, Old School, and Superbad.

Rule #4 - Never commit yourself to anything solid.

If pressed for specifics on where you live or know, always be vague - women are more intrigued by that anyhow. If continually pressed, just yell out: "shots!"

Rule #5 - Wear a polo, college-logo shirt, or a shirt with a quote mocking societal norms.

You want to fit in, or stand out with something that is a conversation starter.

College kids love their sports teams. They will continuously talk about the same subject and try to one-up each other on knowledge.

You gotta know what kids are listening to these days. It's annoying and not as good as gangster rap, but when a song blares out of the speakers, you don't want to be the only person who isn't bonding by singing along and dancing.

College kids only know a few things about drinks: Kalishnokov's Vodka (Popov Vodka's even cheaper cousin), Coors Light, and jello shots. The women will marvel at your Fuzzy Navel's, loaded with alcohol, and the men will envy your skill.

You can pick these guys out of a party anywhere. They will turn violent when they are drunk because of all the testosterone and they will KILL a buzz and a party. They have biceps the size of bowling balls, shirts the size of Baby Gap, and rather than shake hands, will chest bump as if you were in a mosh pit. (See here for reference.)

These games are college essentials and may earn you the love or ire of your newfound friends.

Whenever possible, teach new drinking games to those around you. The pedestal of attention and position of authority will win you the attention of that undecided female.

Drunken make-out sessions don't happen in a crowded, well-lighted kitchen, or a testosterone-filled garage over beer pong, they happen in the darkened, makeshift dance-floor in the living room. Of course, they also sometimes happen in the backyard over a shared drink and pretend philosophical conversation - but that would mean you'd have to be philosophical.

Finally, like Kevin Costner in The Bodyguard, you can't let your emotions get in the way. You've got a job, and besides, in the long run they just don't have enough life experiences to interest you. I mean, would you really want to tell someone someday that you met when you were college crashing?!!?

Well, what are you waiting for? Go out there and have some fun and relive some glory days while you still can. Look a little too old?!?! Well guess what? You're a grad student who decided after a VERY successful first career that you wanted to come back to school. Having a yacht and a home in the Bahamas was nice, but can never quench your thirst for knowledge. 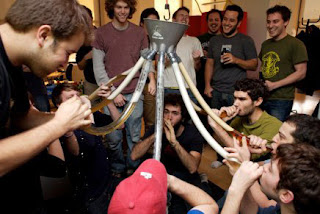