Today is my friend Misty’s birthday. On Thursday, I promised her a post of exhilarating cleverness and unsurpassed intelligence. Because of my lack of foresight, considering I possess neither trait, I spent the entire weekend fretting about how or what I would write about. I could talk about myself, something I never get tired of doing when it comes to engaging with the opposite sex. I could write a poem, but then would be forced to pull out juvenile rhymes that would be tough to impress, well, a... juvenile. I considered writing something with a hidden messsage (below), similiar to Governor Schwarzenegger's to the California Legislature, but then it would feel more like a homework assignment than anything fun. 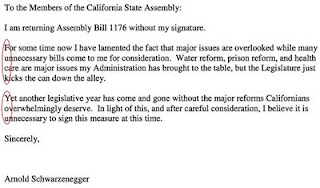 So finally, I caught a reflection of myself in a spoon and thought to myself, I'm ridiculously good-looking; I should do that for a career. Afterall, I'm tired of dealing with people whose brains have a thick candy shell. I'd like to visit places like, say, Santiago, Chile.... but sometimes all I have are these d*mn Nepalese coins. Maybe spend a weekend putting a little maple syrup in my hair, what do you think keeps it up, slick?

So, Misty, while I'm off completing myself, remember that when you're short on life's answers, the "C" is silent in ROCK, and if you're trying to get a girl undressed, never, ever forget the defeat of the Spanish Armada in 1588. If you get hungry, stick a few meatballs in your hands, but go for a bite with the right one first. Life isn't that hard; all you gotta do just tap, tap, taaaap it in.

I'll be honest; in life, I've failed more than I've succeeded - been busy suckin back on grandpa's old cough medicine - but, I'd much rather stick my head up a T-Bone's ass, rather than take the butcher's word for it. So seize the moment - go ahead and call someone a warthog-faced buffoon and get out of that house with all the nipple twisting that goes on there. Ergo, some of what I say you may understand, and some of them you will not. Concordantly, when life gets your beans above the franks, just simply, unlay the tracks. 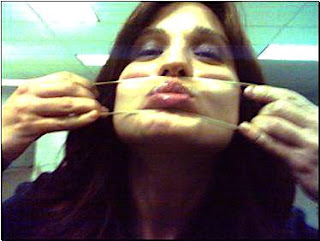