Community College: A Disco with Books and Hot Women 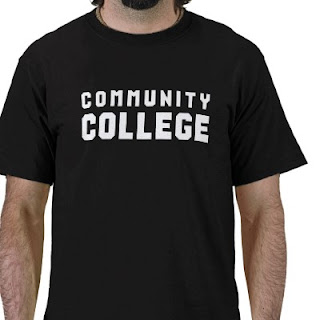 I loved me some Community College! It was the only place that I could write for the school newspaper, run track, serve on the student body, get nearly a 4.0 - which just about tripled my high school GPA - work, and date, all at the same time. While I went there for just one year, it served as the spring board for much grander life accomplishments. Like the eventual start of this blog, the move-in with my parents for a year at 28, the endless comatose vodka drinking sessions, and massive depression.

Chris Rock once said: "Community College is like a disco with books: 'Here's ten dollars; let me get my learn on!'"

And you know what? He wasn't that far off.

NBC is coming out with a new television series called Community. Here's the tagline: It's been said that community college is a "halfway school" for losers, a self esteem workshop for newly divorced housewives, and a place where old people go to keep their minds active as they circle the drain of eternity. Well, at Greendale Community College...that's all true.

So you're telling me there's a chance..... Essentially, Community College is overflowing with opportunity - if you know what I mean. Fresh-from-high-school-legal-impressionable-"opportunity" (for creepy losers like me), and desperate-to-be-accepted-willing-to-do-whatever-divorced-cougars-freedom-"opportunity" (I'll take that too), and just plain dumb "opportunity" (sign me up!).

Let's keep it real here. Most smart girls that go to 4 year institutions are probably not the hottest of their breed. All the hot girls were busy being popular, making out with boys, reading US Weekly, fantasizing about me - setting themselves up for a lifetime of frivolous, shallow thoughts. Since they don't know what to do after high school, many either get pregnant, wander around the malls aimlessly, or go to Community College for a lack of other ideas. That's where us bachelors come in! Plop down your $10, step into a few classrooms - probably classes like basic english and math - and get your learn on sitting next to the hottest girls from all the area high schools.

But that's not it! (This is like a late night infomercial.) If you sign up today, we'll throw in a plethora of divorced, underappreciated cougars! These women would go home with a log if it showed interest. How else do you think I get any action? All you have to do is compliment them and they're yours. They will giggle like young school girls because they've been out of the game for so long and won't realize they shouldn't have gone home with you until after your 3 minutes of pleasure are fulfilled. You will roll over with a smile from ear to ear and she will wonder if all sex is like this and then worry that her wrinkled body is not up to par. The best part is you won't have to worry about kicking her out, she'll already have to get home to her kids.

So rather than waste $100s of dollars every weekend buying drinks to work up the courage to talk to only a mildly attractive girl who has been boosted up by the dizzying amount of sausage in the viscinity and then get rejected, save your money and head for the nearest community college. Besides the great ratio, you can also tell the professors to kiss your rear end if they ever ask you why you haven't done any of your homework, nor own any of the required textbooks. You can do all the things you dreamed of doing in college, but were too afraid to do. Like, I used to dream of rolling off my chair and sleeping in a fetal position on the ground during class. Weird, I know, but I fantasize about sleeping in precarious situations and environments. It turns me on.

You too can fulfill your fantasies in Community College! Good luck!