Home » world » What Time Do Bars, Pubs, Clubs Close Around the World?

What Time Do Bars, Pubs, Clubs Close Around the World?

I'm not much for being a country-basher, but I feel very strongly about this particular topic. Why must our bars and clubs close at 2am!??!?! Is this not outlandish, coming from a country who touts its freedoms and democracy? Not only are we subject to the least amount of vacation days in the industrialized world, but we also must face caps on the time we are allowed to enjoy ourselves!

To get you started and riled up to join the Extended Drunk Hours to do Stupid Stuff Movement (and to get me placed on an FBI watch list), take a look at the vacation days granted to people in other countries:

Those countries seem to be doing just fine. Heck, InBev, a Brazilian beer company, just bought Anheuser-Busch! That extra 12 days of vacation must have really helped their beer consumption and revenue.... You see the circle of life here? If only we had had 12 extra days, we may have outdrank them and saved our American beer company, but the FOOLS in congress made us work AND go home at earlier hours! Now Budweiser is a Brazilian beer - happy?

Let us now continue with the hours of closure for alcohol serving establishments around the world. While hours may vary in countries depending on cities and residential areas, below is a non-scientific list. It's also worth noting that when I say a bar 'never' closes, that means they close when the bars die down, meaning anywhere from 5 to 8am, but can stay open for as long as they choose.

Really!?!? We're about as "free" as India and the United Kingdom?!?!? We might as well have a King and Queen, stop fixing our teeth, and start playing cricket as well!

There are two ways to think about this extension of alcohol-serving operating hours: 1. The extension would lead to more havoc, chaos, and criminal activity from drunkards. 2. The liberation of our freedoms and rights to truly honor our Founding Fathers would lead to a crush of economic opportunity that would bring this country out of a recession.

The other day, I went to Union Street Fair in San Francisco and started drinking in the daytime. I felt no rush to get drunk. I was paced, calm, and genuinely tired, but having fun. The lack of a deadline to stop drinking kept me from going off the charts, like I might normally do when going out at 11pm. When faced with only 2 hours of drinking time (before last call), people binge drink in mass quantities - thus taking shots (a very U.S. thing to do) - and "blacking out" more frequently than someone who knows they have all night and the morning, if they choose. 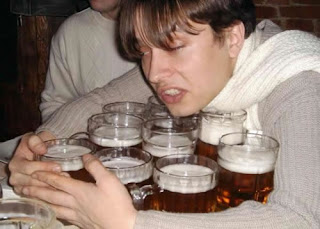 Let's think about this - a country that is synonomous with hooligan activity (U.K.) shuts their doors at 11pm. Logically, people are pounding drinks because they know they have an impending deadline. Then they wreak havoc because they don't want to go to bed yet in a "free" country. When you do have the option to party all night, you're too tired after the clubs to get into fights, loiter, smash windows, and tip over cars. You just want to go get some food (economic activity: restaurants!) and then go home (taxi drivers! prostitutes!) and sleep.

Maybe, JUST maybe if we didn't have limitations on our bars and clubs, we could've saved our beer company...... It's still not too late to save our economy. Please, join my cause and write to the President. Tell him that Iraq, Afghanistan, North Korea, Somali Pirates, the Auto Industry, the Banking Industry, Michelle, Malia, and Natasha can wait - our economy is in need of a boost - and Viagra just won't cut it this time...

P.S. Please let me know what time your country's bars/pubs/clubs close and I will update the list.