I couldn’t help but feel an overwhelming sense of pride the other day when I saw Matt Keller and Maureen Naylor, two former coworkers of mine in Redding, CA, reporting for San Francisco news stations. They had made it to the major leagues after years of toiling in smaller markets across the country. Matt and I had had our run-ins when we worked together, but I couldn’t have been happier if it had been myself. OK, that’s a lie. I would have been slightly happier, but I was still happy nonetheless.

I will use baseball analogies to explain. Although I never played competitive baseball, I'm quite certain I would’ve been the best to ever have played the game. Ruth, Aaron, Mantle, Bonds, Leu. Instead, I went into competitive journalism and competitive sleeping. In one, I ended up a world class champion: A major league all-star. The other, I ended up in Triple A and then retired. That’s the way I like to look at journalism – in baseball terms. The other way I look at it is in sexual terms, but that is for my own delight.

Let me lay down the nuts and bolts. Every aspiring journalist has to start out in rookie ball or Single A in some Podunk town across the U.S. (No offense if you’re a Podunk town.) I was no different, despite my obvious good lucks and deep baritone voice that made James Earl Jones sound like Fran Drescher.

I was not only a part of Single A ball in Pocatello, ID (Market #162), but I was so good, I got to be a part of Single A ball in Redding, CA (Market #130), as well! The way it works is you put in your time, get better, and the Double A’s and Triple A’s (and sometimes, but rarely, the Majors) come calling! At least that’s the way it’s supposed to work. If you don’t get better, you toil away in the minors like Bull Durham for the rest of your lives…. or until you realize you suck or you need to make real money.

Now, as if it wasn’t hard enough to make it to the majors already (markets #1 – 25), journalists now have to deal with the changing economy of news deliverance, which has affected revenue and number of jobs. That’s why seeing Matt and Maureen make it to SF (market #6) was so refreshing, considering the multitude of circumstances (fierce competition, looks, voice, story-telling, writing, style, etc.) Many more of my former colleagues are still chasing the dream, while others are out by choice or by force. I won’t highlight the friends who didn’t make it, but I’m proud of the ones that are representing a proud, (dysfunctional - yes), but proud television family.

Columbus is already a pretty darn good market, so not everyone is trying to move up. Anne and Simone are superstars, so it’ll be fun to follow their careers. Hopefully one person in this above group will make become an All-Star (New York #1, Los Angeles #2, network news, or a national cable show).

Congratulations to those who had the perseverance and determination to make it all the way. All I know is that it was a fun, exhilarating ride for me, full of challenges and character-defining moments. And while I look back with much fondness, I’m happier where I am now, and I hope those that also are out of the business feel the same. I estimate that about 30 - 40% of the reporters I worked with over the years are now out of the business. For the other 60%, the industry may not look so hot right now, but hopefully your news directors will wake up. If not, there is much in life to explore and I’ve realized that limiting yourself to one career or goal is an insult to the wealth of opportunities and experiences that God has given us in this world.

And if for some reason you still can’t capitalize, at least you’ll lead a life ridiculously good-looking. People just give you stuff for free: alcohol poisoning, dirty looks, herpes.... you name it. It's great!

With all my best wishes,
Kevin L.
The Silicon Valley Bachelor 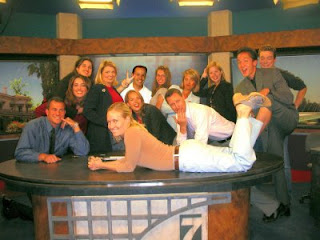