Ok, ok, so I said I would be posting more following the conclusion of my screenplay (still waiting). Well guess what? I lied b*tches! Just kidding, I don't use that kind of language, you little effers. But I have been doing something you might've heard about..... it's called LIFE. I've been living it with my flippy floppies. And I'm not about to Tweet all my thoughts on Twitter at every interval of my life. Folks, if there's something I can ask you to not do, it's join Twitter. Live your stupid, inconsequential life and then die. (I mean that in a nice way.)

Twitter, in case you're wondering, is like your Facebook status, only it's open to the world and it's just constant status and thoughts. You can't even stalk someone's pictures and/or right click the ones with hot chicks in bikinis and save them to your computer in a folder titled "private"! I mean c'mon, that's just ridiculous. Twitter should only be used by people with a following: Celebrities, Politicians, Business Owners, the Menendez Brothers, Aunt Jemima - not Joe Blow.

I already get so annoyed reading the posts and status of people I barely know on Facebook: "I just got home from work." "Going to bed now." "It is hot." I have hidden all these people from my feed for their lack of creativity and for their need to post something so mundane. I prefer witty and/or clever observations, celebratory moments, and intellectual dilemas, like: "Boobs or Ass?" Or "I heart boobs." Or "What if I just turned the wheel and drive into oncoming traffic?" 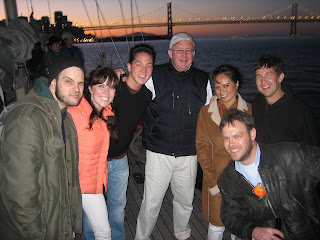 Anyway, while I've NOT been Twittering, I've been on a boat, motherf*ckers! (It's okay if you don't spell the word out.) My friend Margaret invited me and 39 other of her closest friends. I'm ranked #7, I think. We proceeded to drink and my toes loved the fresh air! And let's just say I had my way with a mermaid...... if you know what I mean....

So go out and live your life, don't join Twitter, and post more bikini pics on your Facebook page - I'll be ...... I mean, you'll be glad you did.