Home » SNL » The Best of Andy Samberg - The Next Great Comic

The Best of Andy Samberg - The Next Great Comic 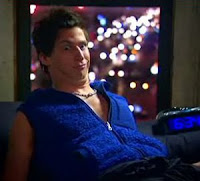 SNL has turned out a number of hit comedians - some with limited timelines (i.e. Chris "You can never get enough Mango" Katan, Molly Shannon) and others with lasting power (i.e. Eddie Murphy, Adam Sandler, Will Ferrell and the list goes on and on) - but the next comedic gem has to be Andy Samberg. I love this guy. As I've said many many times before, I'm not gay, but I'd have sex with this man if he asked. He wouldn't even have to call the next day. (Of course, I'd like to be the pitcher, so I'd probably send a polite text message the next day.)

As a Bay Area product (Berkeley High), I gotta give the hometown kid some support. It's obvious his videos don't have enough attention on YouTube, so I really don't want to see him out of a job. What makes Samberg more impressive is that he mixes comedic timing with simple, yet lyrical genius. The production value and beats of some of his videos could stand alone without humor and still gain a following.

Versatility is the mark of a comedian with lasting power - that's why comedians that played off a certain, single type of humor (Katan, Shannon, Tim Meadows) were bound to be replaced and forgotten before long. Don't get me wrong, I love those three, but I wouldn't plop down money at a theatre to see their schtick movie after movie.

Some of the best, lasting comics have been musically-inclined to boot: Eddie Murphy, Adam Sandler, Jack Black, and you'll see Samberg up there before long. Recently, he was in Paul Rudd and Jason Segal's I Love You, Man. He played the gay brother of Paul Rudd. That's all I gotta say.

OK, I lied. I have more to say. This guy's 30 - just like me. Doing what he loves. So is Kobe Bryant and he's 30 too..... but I hate Kobe Bryant. Anyway, when Kobe retires and Samberg starts doing dramas, then I'll know I'm old. Until then, 30 is the new 20, right? Or is that just what old people say to make themselves feel better?

While I'm personally going through a lot of introspection now, I know for sure that I have never stopped adding layers and complexities to my persona. I admire folks who stick to a craft, enjoy themselves, and succeed. At the very least, we need to challenge ourselves and have an amazing time doing it, which I think is the real success. As I still wait patiently for those in Hollywood to get around to reading my screenplay (I've got a perfect part for Samberg), I've already decided that this is only just the beginning. I've got more in store, because it was fun to do.

I love laughter. I love passion. I love Samberg. And I love sex. So go out in the world, get some, and be the boss - just like Samberg.