Home » Silicon Valley Bachelor » Turn Your Head and Cough: Undressing For a Man

Turn Your Head and Cough: Undressing For a Man

It's always a peculiar situation when you get naked in front of a man (not that I do it that often - I swear). Well... I went in for my physical the other day, (now that I'm 30, might as well do these old -man-type things), and I didn't realize that I would have to get naked. So after the nurse tells me to disrobe and leaves the room, I'm in the middle of pulling off my pants and underwear together in one full swoop when the doctor (male) knocks on the door and just enters. As I interupt with, "hold on," I realize how futile that request is, as it is an inevitability that he will see me naked. He ignores the request anyway and walks in as I quickly put on the plastic shorts they give you, knowing that it will not stay on for long. 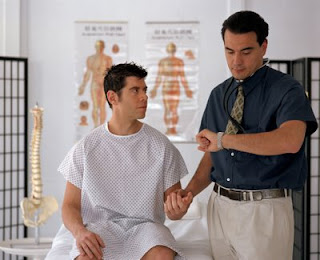 First of all, there's a huge difference between disrobing for a guy and a girl. With Dr. B (as I'll refer to him), I felt all shy and weird as he talked to me. Almost as if I didn't want to be a part of this "courtship." What does he take me for?!? Some kind of floozy?! He can just shoot the breeze with me and then tell me to drop my pants and I'll do it? I DON'T THINK SO! I disrobe because I feel like it!

So as he's talking to me, and I give short one-word answers, I catch myself thinking: "should I give my 'member' a quick tug so that it gets maximum lengthage?" With girls, the quick 'member' tug is commonly employed, but why the heck are thoughts of impressing this male doctor on my mind? Ultimately, I decide not to sneak in a quick tug, but then as he's holding the stepchildren, I think to myself: "maybe I should've trimmed the hedges." WHAT?!?! Then I start thinking, should I be looking at him or should I look up? I end up looking down at him and then think that normally when there's a head situated there and I'm looking down, something else is going on. I want to laugh at my own internal thought, but I decide to stay mature.

When it was all said and done, I felt much more comfortable with Dr. B as we chatted. It's like that feeling after sex when you can let down your guard because the objective has been achieved. He already saw the best of me, so why not carry on with pillow-talk? At this point, he tells me that he'll see me in a year. WTF!??! I AM a floozy. I try and tell him that it's cool, we can keep things casual, maybe meet up every once in awhile, but he ignores me and tells me essentially that he's just not a "one penis-type-of-guy" and that I have to talk to his assistant to see him again.

Men! Sheesh! I gave that man the best minute of my life. As I swallowed my pride and walked out of the building, I glared at every male patient in the waiting room, thinking: "he'll use you too!"