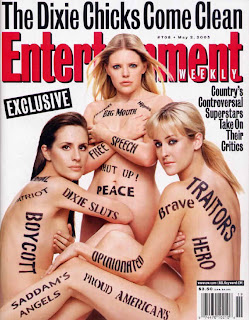 One of the most "shameful" things for me as a country music fan is the way the country community treated the Dixie Chicks following their infamous (we're) "ashamed the president of the United States is from Texas." Since that comment in 2003, the hate for the Dixie Chicks spread from Texas and throughout, as they were banished from country radio, fans held CD burning parties, and the group even received death threats. Other country artists even told them to just 'shut up and sing.'

The root of the problem is that Texans are a brash, proud people (I can't speak for the rest of country music fans). So while I am proud that a fellow Texan ascended to the most powerful position in the nation, I am ashamed of the decisions he ultimately made while in office. If only the Dixie Chicks were as eloquent in speech as I was... oh wait, those Chicks did win a few Grammy Awards for songs of the year.

You can imagine my surprise this morning on the way to work when I heard the Dixie Chick's "Not Ready to Make Nice" on one of my country stations - first time in almost 6 years, and it was a welcome feeling that maybe we are ready for change.