I once had an opportunity to intern for "The Man Show" with Adam Carolla and Jimmy Kimmel. I had met Adam Carolla at a party in Santa Barbara while I was a student at UC San Diego and promptly asked him for an internship. He put me in touch with 'his guy' - and I was in. Trouble is, I decided to take an internship with a local news station in San Diego instead. As you may well know, Adam Carolla went on to Loveline and a mega contract with Free FM and Jimmy Kimmel has his own late-night talk show on ABC (and of course, he's F*cking Ben Affleck).

If I had to pick one decision in my life that may have altered my entire future - that would be it. It's not that I look back and regret it, it's just that every once in awhile I think about the contacts I would've made, the career that would've been different, and more importantly, the boobs I would've seen while on "The Man Show." It's then that I want to shoot myself. Painfully. Starting with the small toe, and working my way up through the kneecap, and then my ears, and so on, and so forth. But really, I don't think about it all that often....

Instead, I went on to a journalism career that helped define who I was, and am, as a person. It was a decision that brought with it: independence, adversity, and strength. No other experience could've given me such character, especially for someone who'd been 'handicapped' by overprotective parents. Becoming a reporter, and staying a reporter, was one of the most challenging, lonely, and earnest endeavors anyone can go through to get a job. 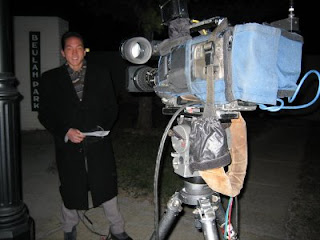 I saw so much about the human character in the stories I reported on, from death to hope, that will always outweigh a lifetime's worth of bouncing boobies on "The Man Show" (it's a slim margin of victory, but still...). As I outline the rewrites for the 2nd draft of my screenplay, I think about how much my former experiences help in being able to draw on inspiration, emotion, humor, and context. Interviewing and talking to hundreds of real people about real situations in the heartlands of America is something that, I think, far outweighs the superficial and pretentious shortcomings a Los Angeles career would have had on me.

Will I one day make it as a screenwriter? Maybe. Would it have been easier if I had taken that internship with The Man Show? Maybe. Would my screenplay have been any good if I had stayed in Southern California? Probably not. My overwhelming dream at that time was not screenwriting, it was journalism, that and seeing my beautiful face on the television screen for thousands to admire and enjoy. And no one admired it more than myself. (Just kidding... but not really).

I encourage everyone to take the road that will fulfill your passions - even if it is the road less traveled. And even if you don't accomplish exactly what you wanted to, it's the extension of yourself that builds your character for years to come. I accomplished one dream of being a television journalist, but I have many more dreams to go. Those dreams that have been met, have strengthened my resolve and only made my others, more attainable. 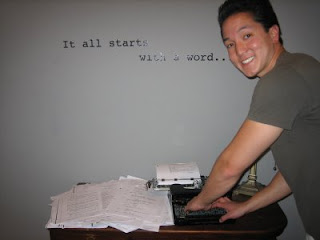 As the economy faces the prospect of a growing population with less and less jobs, it's time for Americans to take advantage of the opportunities afforded to us. We need to take chances over the next months and years and fulfill the dreams we still have. This is the best way to help the soul recover, and quite possibly, our economy.

P.S. Don't ever be afraid to tell "The Man" to shove it - the power of our dreams can always forge another path for us.