What Entourage and Guys Can Learn From Sex and the City 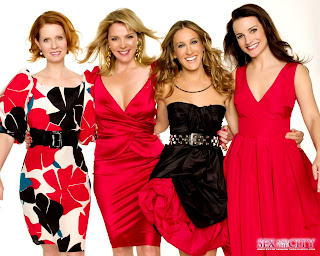 So I watched Sex and the City the Movie this last weekend - my coworker said I had to turn in my man card - I quickly changed the subject, thus keeping my card. Anyway, besides a bit of candid female conversation that was a bit laborious, I found the movie to be pretty darn good. It was a touching piece of female friendship, camaraderie, and comfort. A level of comfort that is missing in male relationships disguised by machismo, bravado, and homophobia.

One thing that caught my attention at the conclusion, was that 3 out of the 4 guys the women of Sex were with, were less than average, at least in television standards. This didn't necessarily bother me, but I've grown accustomed to seeing dizzying good looks in love interests on the big screen. I asked my friend Karen, who said that one of the themes of the show was exactly that, looks are not that important. I sat back and thought about this far-off and ludicrous idea for a moment, before deciding that Sex and the City was on to something!
Holy Schnikes - looks aren't that important!
If you look out into the world of women on the richter scales of 7s, 8s, 9s, 10s (because, let's face it - those are the only ones we're checking out) - they are absolutely almost always with guys who are below them on the scales. I hardly ever see a really good looking guy with a girl who isn't a knockout. You know why? Our dating pleasures are infinitely defined by the machismo I described above and by our viewing habits. I know of very few guys who don't care about what his male friends think about his girlfriend. We must always date 'hot' - or above our means. 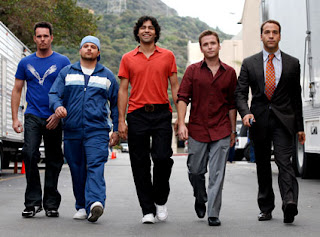 We watch shows like Entourage (the supposedly male version of Sex and the City), where no hot women means we stop tuning in. The whole show is built around men who are living a life that the common man can only dream about. We want to see the guys of Entourage hook up with numerous girls that they would normally NEVER have access to. This is one of the reasons that guys get older and older before they want to settle down. We're too busy 'chasin' the dream!' Good is good, but could be better. Just look at your television screen.
There's a great country song (actually female sung), that goes, "Just as soon as I get what I want, I get unsatisfied. Good is good, but could be better. I keep looking, I keep looking for, I keep looking for something more." It's actually kind of sad, because while women have learned that happiness doesn't reside in good looks, men are still off searching for that next bombshell that television tells us could be ours.
Men could use a show like Sex and the City, or at least one character on Entourage that is going out with a girl who is less than attractive but sweet, caring, smart and wonderful. The character would almost definitely get grief from his friends, but the tune would change when they see the level of engagement, depth of character, humor, warmth, and self deprecation that, quite often, is lacking from some of our "hottest" women. It would be a shocking revelation for them to find out, and for many of us at home, that 'looks aren't that important' - a previously unexplored realm for a 'guy' show.
A male show would fail if 'looks aren't important' were the central theme. Man cards would be repossessed by the boatloads. So as Sex and the City has told us, it must be a subtle message -a subtle message, but an important one that a generation of males are in desperate need of.
Sincerely,
Kevin L.
The Silicon Valley Bachelor