The SV Bachelor has Decided to Announce His Endorsement for President 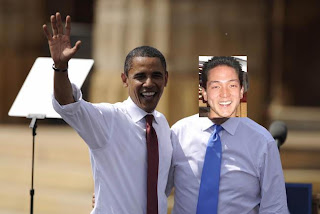 Following Colin Powell's endorsement of Senator Barack Obama, many people have been eagerly awaiting my decision on whom I will be endorsing in next week's Presidential election. Both campaigns have failed to reach out to me, but after much thought and deliberation, I have decided to endorse Senator Barack Obama. This decision has not been an easy one for me, since I have the utmost respect for Senator John McCain, but this decision has been based strictly off of judicial nominations.

Right now, seven of the current Supreme Court Justices were appointed by Republican Presidents and only two by Democratic Presidents. Even with this discrepancy, it's generally considered that there are four "conservative" Justices and four "liberal" Justices, with one Justice who mostly votes conservative. I'm ok with this. I think there needs to be a balance in the highest court of the nation. If there are six "conservative" judges on the Supreme Court, I think it sets a dangerous precedent.
Right now, Justice Stevens at 88 years old is the oldest Justice on the Court. The next oldest Justice is Ginsburg at 75 years old. Both are grouped in the "liberal" wing of the Court. If a Republican President nominates a replacement, no matter who controls the Senate, the Judge will have "conservative" leanings. This can have seriously dire consequences in policy matters that we have grown up with. This is why I cannot support Senator John McCain for President. An extremely unbalanced Court can DRASTICALLY change the United States as we know it. The court needs balance.
Besides that, Sarah Palin is just nuts. I like McCain and I think he had to pander to the right to win the election. If he had won, he would've come back to govern from a moderate conservative position. But he should've won 8 years ago. He would've made changes, but now his time has passed. Senator Obama is the man to lead us forward now. He has give people purpose in the outcome of this election and this nation. If he loses, millions of people who never thought they could make a difference will lose as well. Senator Obama HAS given hope to the hopeless. His legacy will be imparting millions with the courage and resiliency that will carry their hope to future successes.
Elect Senator Barack Obama for President of the United States.
Sincerely,
Kevin L.
Silicon Valley Bachelor