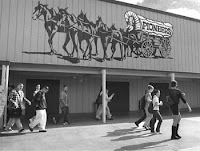 This weekend is my high school's 50th birthday and there are celebrations and famous alumni that will all be in attendance. People like Papa Doo Run Run and....... and .... I think that's it. Kurt Rambis went to our school in the 70s, but there have been no sightings of him since.

One thing is for sure: the Class of 1997 will probably represent the least. Let me explain. I went to school at a time when it became uncool to like anything to do with school and spirit. A few years prior to the start of high school for my class, Nirvana's Smells Like Teen Spirit did irreparable damage to the psyche of high school students. No longer was it cool to have teen spirit, cheer at Pepper Rally's, or show any outward signs of emotion. We had to act like we were on the verge of committing suicide at any point.
One year later, Dr. Dre's album The Chronic, let us know that not only should we not care, but we should also slap some b*tches around too. It was quite a tumultuous period for a group of kids desperately trying to find out who they were before the start of those all-important high school years.
Then to throw EVERYONE for a loop, freshman year (1993) spurned such hits as Whitney Houston's I Will Alway Love You, H-Town's Knockin Da' Boots, Shai's If I Ever Fall in Love, Silk's Freak Me. What was a hard-core, gang-bangin' Asian kid living in the burbs suppose to do? All of a sudden, we had to be these introverted lovers, who, while hard on the outside, was really desperately seeking love on the inside.
But it doesn't end there. Sophmore, junior year, who woulda thunk it? Ace of Base. Salt-N-Pepa. TLC. Now we had to learn to dance while still keeping our cool around the homies. AND women had all these empowering songs like they could possibly dump us! Or *gasp* "Creep!" Once only the domain of men, now it was equal status when it came to cheating. Those pigs!
Finally, to completely F us all over. The Macarena. Enough said.
By the end of high school, no one knew who they were. I think like 75% of my class went to community college and the rest just decided to smoke pot for a few years until something interesting hit them. 11 years later? I'm STILL confused. Sometimes I do the Macarena and then go to the bathroom and slap myself around. How did I become so gay?!?!? Then I go back out in my tight muscle T and dance the night away to Bootylicious.
See you at the reunion!
Sincerely,
Kevin L.
The Silicon Valley Bachelor
P.S. Here's to the class of 1997 for almost finding your way! 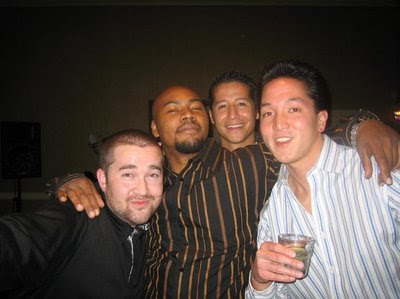