3 Things A Woman Shouldn't Do in a Relationship

I am by no means a relationship guru - this blog has 'bachelor' in the name for a reason. Getting rid of that moniker is easy, but getting rid of it for the right girl - is hard. In my time, I've dated a gal or two and here are 3 lessons learned that may just help you extend that relationship an extra month or two.... or at least until your birthday comes around so that they can buy you a nice expensive gift.

1. Never ask your partner how many people they've slept with: I know this is a common question at some point, but just don't do it. No matter what the number, you will not be happy. "Two!??!?! I guess that was just how you was raised!" - Chris Rock. I've made it a point to refuse to answer that question. Oh they'll ask during pillow talk (because that's when we let down our guard), and make you feel like it makes no difference one way or another, but lo and behold three months later during an argument, "Well, why DON'T YOU GO OFF AND SLEEP WITH another 300 girls!!!" (300 is probably inflated, it's at least a plus or minus ratio of 5)

2. Minimize the baby talk: I know there are many times where you just want to be babied, and us guys are willing to oblige, but utimately, we want to be going out with a woman - not a child. Unless your Michael Jackson, I recommend that you guys don't encourage the behaviour by succumbing to baby voice as well. I admit, I'm guilty as charged and I've paid the price to a floodgate of more whiny baby talk in everyday situations: "You don't wub me anymore?!" Ugghh, I just vomited in my mouth.

3. Never act jealous: This really goes towards both men and women. I've been pretty fortunate recently, but there's been times where I've gone out with girls who really just want to see you jealous (it's like a sign you care... or something like that, I wasn't really paying attention). I think it's always best to convey absolute trust in the ones you're going out with, after all, when else will you find time to play video games and watch sports, than the times she's off hanging with her male friends at the ballet? You should show you care every once in awhile by putting down that Xbox controller, but you just can't handcuff a girl. It just comes off looking petty and sounding bad: "Who's this guy? Does he work out? How much money does he make? Did he ever live with his mom? Errr, not that I did or anything, that would be lame. Anyway, you can't hang out with him anymore unless he's gay." See what I mean? 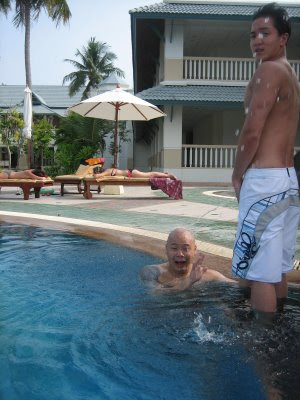