Team Spain Can Kiss My Ass

If you ask me, there hasn't been ENOUGH hoopla over Team Spain's basketball picture for an advertisement running in Spanish newspapers. 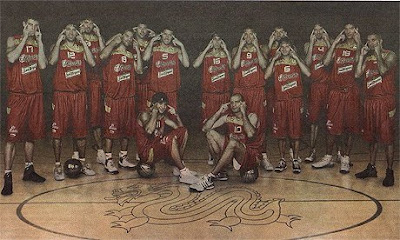 I wouldn't say it's an issue of them being racist, but moreso insensitive and insincere. Their apologies have been matter-of-fact. Take for instance these quotes when pressed about it during press conferences:

Spain's point guard Jose Manuel Calderon - "I think we're talking about things that don't matter. We feel bad, but there is too much talk about it."

Who are they to decide there's too much talk about it? As someone who grew up in a town of 30,000 in Texas, with fewer than 5 Asian families in town, that gesture brings with it a lot of racist and hurtful feelings. I can't begin to describe how many times that gesture was used to make fun of me as a child. Granted kids can be an unforgiving lot regardless, there is no other gesture today that illicits so much anger and pain for me. It played a large part in me growing up not wanting to be Asian. It took many years for me to backtrack and embrace my cultural heritage.

The right way for Team Spain would and should be for them to apologize profusely whenever questioned about it. They have no right to say there's too much discussion on this matter. They are not the offended. It would have been nice for the Spanish coach to reprimand his team in public, apologize to everyone who has been offended, acknowledge how the gesture has hurt many Asians living in other countries and maybe suggest he we will have his team undergo sensitivity training.

I often admire the African-American community for quickly rallying for issues that affect their community and condemning those offenders. Their battles have helped out all minorities and immigrants from other countries. We owe them a tremendous amount of gratitude for the battles they have fought in making the United States a more racially tolerant and understanding country. There's still a lot more work to be done, but the Asian-American community needs to step up forcefully as well, so that Asians who have been persecuted and embarassed, no longer have to suffer from the shame of insensitivity and ignorance.

In the meantime, I will be rooting for Team USA to put a real hurtin' on Spain.