Signs You're the Best Wingman Ever and Other Musings

It's weird not having a screenplay to work on, I have all this time on my hands right now. I don't know what to do with it. I could literally write like 3 blogs a day, but that's overkill and I really don't want you to know my innermost thoughts. They're really profound. I'm not one to brag, but my thoughts are kind of a big deal.

Like just the other day, I asked my friend if he had to choose a woman to marry based off of her ethnic background and assuming she cooks and would cook the food of her ethnic background, which would you choose? It's deep, I know and I was rightly rewarded with that look you get when you've asked a question that is just so profound and intriguing that people get excited about what their answer will be. It's hard for me to answer the question though - Most people would probably go with Italian or Mexican, but not me, I'm going with Antarctic.
Hmmm, let's see, in what other ways am I a genius in thought? (Because I surely am not in real life!) Hmmmmmmmmmmm........ ok, that's it. I give up. I had one good thought this week mixed in with thoughts of drunk dials, booze, bong resin, nudie sites, and late night Jack in a Box. I did get a lot of material sent to me about bachelorhood. Take for instance the picture below from PhotoBasement. The title of the post is 'Bad Time to Be a Wingman': 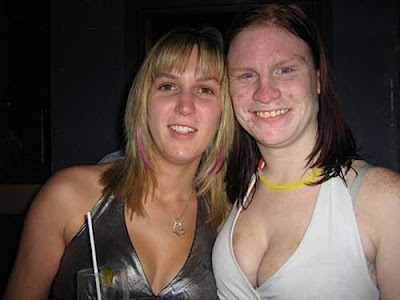 OK. OK. I know it's mean, but people send me the stuff (coworkers) and it gets a rise out of folks. I didn't say it though, and it totally throws my Rule of 13 for a loop. Then again, one party member has to be hot for that rule to take place. Here are some other good links people sent me about rating girls according to an 'Area Code' system and here's another link charting the benefits of girlfriend vs. friend with benefits. Both worth a look....