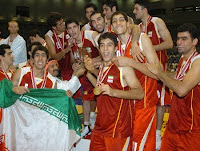 It saddens me to hear about so much anti-American resentment around the world. Most people I've met out on vacations know the difference between the current administration's policies and the majority of the American people, but I worry about those that are less-affluent and do not travel as much.

Many of my friends in the Bay Area are Iranian and get along with many different people. I wonder if the people in Iran that cheer Iranian President Mahmoud Ahmadinejad's US-bashing statements can differentiate between his policies and the American people. Likewise, the American people can also have a one-sided view of matters. I hope the American people know that President Ahmadinejad does not speak for all of the Iranian people.
Today, it was announced that the NBA has invited the Iranian National Basketball Team to come and scrimmage against NBA teams this summer in preparation for the Beijing Olympics. I love it when countries can come together in sports and hopefully spread goodwill all around!
Sincerely,
Kevin L.
The Silicon Valley Bachelor