Life in San Francisco and My New Pussy.... cat

I got up early today to explore my new neighborhood in the city. First off, it was weird getting up before 2pm - I can't believe how many people are so wide awake at that hour! They wanted to talk to me, but I would just grunt. 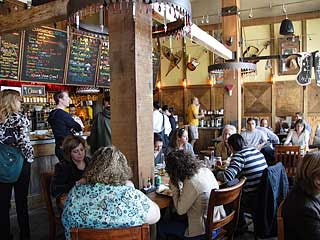 I really, REALLY like the Lower Pac Heights area on Filmore. I ate at this place called The Grove that was pretty sweet. Only it was so busy, the only seat I could get was facing a pillar. So much for people watching. The weather is awesome though. My car bumper ALREADY got scratched last night. Oh well, what can you do....

I have some really chill roommates, a guy and a girl cousin combo, who I have barely seen in my two weekends here. That's probably a combination of my sleeping hours and them living their lives. They have this black cat named Lucky that listens to commands. It's quite amazing. For instance, I'll say "Get off my BEDDD!" and Lucky will obey. Or "Get back in the house!!" or "Stop trying to claw at my eyeballs!!!" Such a great cat.

My roommates also have one of those dry erase boards that says "Who loves to play beer pong!?" And a quote that's written "I'll do a body shot off Lucky." - Kyle. These are my type of people.