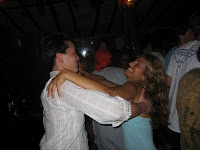 I'm a man who prides himself on a somewhat extensive vocabulary (beer, boobs, cock, balls, etc.). So it was quite a humbling experience yesterday in my Spanish 2 class when we had to speak to each other and answer questions in Spanish. When I was talking about myself (which I love to do with all strangers), I found that my mind was much more ambitious than my Spanish vocabulary. I had to condense much of my life story to 'I like beach,' 'I like beach a lot,' 'I live in Cupertino,' 'I like eating.' This was quite frustrating, but everytime I thought of something about myself that I wanted to say, I thought better of it because I knew it would open a new can of worms that I would have no means of conveying.

I'm pretty sure everyone was saddened to not hear the story of my 4 point, 4 rebound performance against Saratoga High School my senior year. Or the story of the time I stole Monopoly money in an attempt to beat my sister at a board game. These have become classic tales revered in my mind, that are just waiting to be unleashed on the next unsuspecting female.

Speaking of females. Did I tell you my class is like 7 females and me? Granted they are almost all well over 40, I could sense a bit of desperate housewife in them as I wore my most muscley t-shirt as I pointed to abstract objects that made no sense in my telling of 'Yo vivo en Cupertino' as I flexed and pointed left and right. 'I like the beach' I would say in Spanish and point to nothing in particular, just so my muscles would flex in its peak position. I almost burst a vein in my head I tell ya!

I do have to say, I really love being back in the classroom. Who knew how much you can learn and how fun it is, when you really WANT to learn!?!? I could've made something of myself if I had this attitude as a schoolboy! Instead, I worked all my boyhood life to get to that 4 point, 4 rebound performance. That was the peak of my life.