Home » What is a Cougar » The Loosely Defined World of COUGARitaville

The Loosely Defined World of COUGARitaville 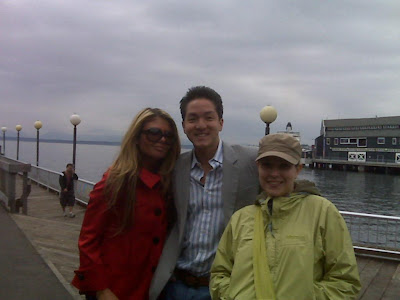 I like me a Cougar! They make you feel so good about yourself and treat you like a piece of meat. Well, with that fine piece of wisdom said, I just got back from a conference in Seattle and I always make time for my good friends at Call Genie. (To protect the innocent, their names have been changed). So Mark McCormell calls Cherie McMichaels a Cougar (can you guess which one she is above?). Cherie of course looks like she's 23, but in actuality is in her early 30s. She's dating a guy a couple of years younger, so I wondered whether the term 'Cougar' now has a broadened definition that encompasses any woman dating a younger man.

For the record, reliable sources (College Humor) have dubbed the definition of a cougar as:

Definition: A Cougar is a female, usually between thirty and fifty years-old, who enjoys the sexual company of younger men.

Breeding Habits: Cougars are only usually interested in men under the age of twenty-five. Also, Cougars are non-committal, choosing to move from mate to mate without ever settling down. It is not uncommon for the same Cougar to attack (sleep with) many different men in the same group of friends. Furthermore, Cougars are older and more practiced in the ways of snaring a mate so they will rarely broadcast their intentions to sleep with you until you are already in her Jetta, headed for the condo she just bought. It is this elusive behavior that earns her the name "Cougar."

Habitat: Cougars are most often found in bars and other places where alcohol is freely distributed. She can be seen lurking in the shadows, selecting their prey with the precision of a laser-guided missile. Most often, she will have some sort of fruity concoction with a high alcohol content in her hand (see: Appletini), and a slim cigarette dangling from her heavily made-up lips.

Appearance: The Cougar, at first, appears like most older women one sees: slightly drooping breasts, somewhat leathery skin, lightly sunken eyes and clothes just a few years behind the fashion. On closer inspection however, one finds that the Cougar has taken care to make herself appear younger: the makeup is thicker, the clothing is tighter and the perfume is stronger. She clearly has spent hours stuffing her not-18 anymore body into that leather skirt and halter top and desperation reflects that.

Psyche: The Cougar is a complex emotional creature. Remember, most of her friends are probably married and have kids by now. This, naturally, leaves her feeling lonely and useless, which explains her need for companionship. However, being an older woman, she is at the peak of her sexual ability which is why she preys on younger men (who are also at the peak of their sexual ability). This odd pairing -Cougar and twenty-three year old guy - can be seen at last call in bars all over the
country every weekend.

As I am well-impressed with the definition given, I'm going to go with it, but I would have to disagree with my friend Mark - Cherie does not reek of Cougarism. I'm going to say in order to be a Cougar, you have to have at least shown some signs of aging - to which Cherie hasn't. The term is thrown out there so much these days, I wonder if it is even offensive? I sure hope not. Cherie seemed ok with it. But inside, maybe she was fuming - who knows? Her coworker Jolie Mizerati then asked me whether she looked older than Cherie, to which I am no great fool. So using my razor sharp canine senses, I quickly said 'I don't know' and looked away.

Miss Jolie also informed me that if she didn't know me, she would hate me from reading my blog, citing evidence of cockiness! I argued adamantly that I am very self-deprecating, very humble, and would never, EVER tout my amazing virtues. Ridiculous..... And for the record, you DO look older than Cherie - B*TCH!!!!

Just kidding, hahaha, I am SOOOO funny. My next post will be about how funny I am.

P.S. I love you Jolie, you're my favorite - next to Mark and Cherie.