Home » San Francisco » Listen to the Woman... especially when it comes to Apt. 24

Listen to the Woman... especially when it comes to Apt. 24 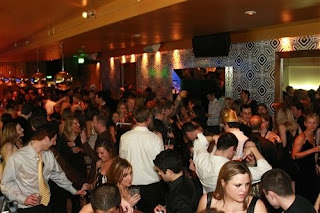 Here I am in my hotel room in LA at 3am writing this blog post - finished with my first wave of work. Rather than go to sleep, I thought of my blog and how therapeutic and relaxing it is for me to write. Thanks for humoring me and reading.

This last weekend I went to a place in San Francisco called Apartment 24, where the old Dolce used to be. Apparently it just reopened, and my good friend Vivian suggested I take my friend from Brazil there. Let me tell you, I have never seen such a disproportionate ratio in my life..... but here's the kicker: they were all FEMALE! I was like 'holy schnikes, what the heck is going on here?!?' I proceeded to bask in my good luck by buying all my friends Patron shots.

The odd thing about the plethora of women, was that I felt all awkward. I went out to the dance floor and literally had a girl to the left of me, to the right, behind - like 3 rows deep. I couldn't take it and I went back to the bar for more libations. I normally like to swoop in after the women have sized up all the other tools to realize that I'm a special tool. This abundance of women though, threw my game all out of whack.
The cool thing was, I felt no rush to hit on any girls because there were so many of them - so I really enjoyed the company of my friends, which I don't normally do. I learned so many great things about them - like their names, jobs, heck, my best friend even got married!! Man, friendship is grand I tell ya. So grand, by the time I assumed my rightful position on the dance floor, the ratio had went back to 60-40 male. Bastards!
So the lessons here? Forget about 'friends' - they suck. Go to a club early (I'd say 10:30, 11ish), don't let the opportunity pass you by, and hit on those hot girls before they leave - because you know hot, classy, respectable girls don't stay around past midnight. I don't know why, but it's probably because being a tool is one thing, but a drunk tool? Too much.
Also, if you're going to go to Apt. 24, go soon, because pretty soon it'll be filled with dudes and it'll be just like you're in San Jose again.
Sincerely,
Kevin L.
The Silicon Valley Bachelor
P.S. If a girl suggests you go somewhere: do it. If they like it, other girls probably like it too!