Either Lower Your Standards or Move to New York

I didn't go out this last Saturday for the first time in recent memory. I think I have issues. I've been doing it for so long, that I didn't know what to do with myself. I knew I wanted and needed to work on my screenplay - but instead I found myself cleaning the house and wondering what I'd be doing if I were out each moment I looked at the clock.

Like at midnight, I was like 'hmmm, this is probably where I would spill my first drink on my shirt and not notice it until the next day.' Or at 1am, I was like 'this is probably where I ask a girl the same question I asked her two minutes ago.' At 2am, I was thinking 'this is where I'd be rushing to the parking lot to beat the traffic to Jack in a Box.' At 3am, I looked at my bed and thought 'this bed just doesn't seem right without a few curly fries laying by my pillow next to a 5.' (See earlier post).

Oh well, it really doesn't matter - take a look at this chart bellow that shows we're about 100,000 single women in the hole. That's a pretty huge discrepancy - but great news for you gals....and some guys (not that there's anything wrong with that)! I found the chart on Richard Florida's (not to be confused with Flo Rida, the rapper. I think that's what the kids are listening to these days) Who's Your City site.

That just means you severely game-challenged guys in Silicon Valley are just going to have to up the stakes and sell a few more start-ups and then move your butts to New York, where there are 210,000 more single women than men!!!! Gals like Julia Allison might await you (but probably not). She's received a fair amount of scrutiny from local bloggers for coming to the Valley from New York to search for some tech love. Who cares? She's still the hottest girl who's ever attended a tech event. Why she chose the Valley, I don't know. Too bad I don't like blue dots.... 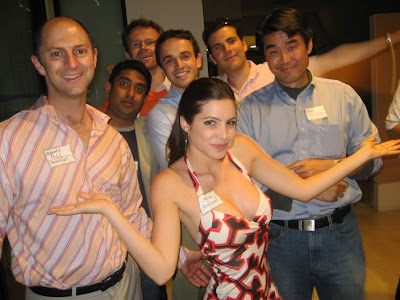 P.S. The picture of Allison is from Valleywag and shows off her .... errr the men she has to choose from. Good choice Julia!